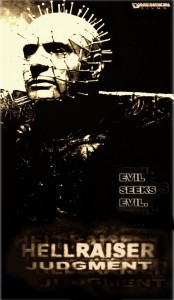 There are lots of mixed feelings flying around in regard to Hellraiser: Judgement, the second Hellraiser sequel not to feature Doug Bradley as the iconic Pinhead. While the absence of Bradley has turned many off the film, this look at Pinhead as played by Paul T. Taylor shows a character seemingly unchanged from the look we all know. Indeed, it would take a keen eye to distinguish the picture from one of Bradley in the role.

This stylish artwork marks the first glimpse we’ve gotten of the new Pinhead, who allegedly steps back a little in the film, allowing new cenobites The Auditor and The Assessor (Feast director John Gulagher) to lead the demonic pack. Taylor may look the part, but we are of course yet to see him move and hear him speak as Pinhead. Hopefully we’ll get our first clip sometime soon.

In Hellraiser: Judgement, Detectives Sean and David Carter are on the case to find a gruesome serial killer terrorizing the city. Joining forces with Detective Christine Egerton, they dig deeper into a spiraling maze of horror that may not be of this world. Could the Judgment awaiting the killer’s victims also be waiting for Sean?

It’s hard to know how high to set our hopes for this one. There’s obviously a lot of cynicism from fans, although last month’s announcement that Elm Street’s original survivor Heather Langenkamp will join the cast peeked some fresh interest. For now though, we have our Pinhead. Now we just need some footage.