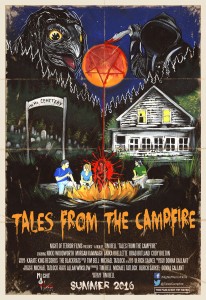 The horror anthology has come back in a huge way of late, enjoying a popularity it’s not seen for over 30 years. The found-footage approach of V/H/S and the rapid-fire directorial showcase of The ABCs of Death represent a fresh, contemporary take on the format, while others are looking back, bringing a deliberately creaky, vintage flavour to the table. Sitting firmly in this latter er, camp is the upcoming Tales from The Campfire which, going by these two rather awesome trailers (and posters) looks to be going for an all-out ‘80s vibe, taking cues from Creepshow and the like.

Currently in post-production, Tales from The Campfire is a self-funded film from Canadian independent production company Night of Terror Films. It is written and directed by first-timer Tim Bell, and looks set for a summer 2016 release.

From the Press Release:
Tales from the Campfire is a retro inspired anthology horror film that tells the tales of three stories around a campfire with events happening at the same time in the film’s wraparound story. Each campfire story has its own unique look and feel, touching on different sub-genres of horror.

Four friends plan a camping trip at a small campground to spend an evening sitting around a fire telling each other campfire stories that all supposedly happened within the area that they’re camping at. Strangely enough, their campground happens to sit right beside an old creepy cemetery, named ‘Ha Ha Cemetery’.

As the night goes on the group slowly starts to realize that their stories are starting to tie together, and what starts off as a quiet night, soon becomes a night of terror.

Campfire Story #1 titled “A Dark Past” has a 70s look and feel in a haunted house setting as it takes you through the twisted tale of Claire as she revisits an old family home from her past, revealing dark secrets, only soon to discover that she’s not alone within the house. 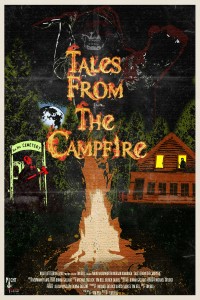 Campfire Story #2 titled “Ha Ha Cemetery” resembles the style of an 80s slasher as you follow the tale of Jake & Chelsea on a dark and quiet night as they wander into Ha Ha Cemetery, curious by its name, while trying to figure out what secrets it holds. Unfortunately for them, they are encountered by a masked maniac with an axe to grind.

Campfire Story #3 titled “The Dead Will Rise” is influenced in the 60s style of the original Night of the Living Dead with a black and white color grade and cropped with a VHS presentation. This tale follows four Campers from Camp Black Lake as they discover a lost and forgotten cemetery in the middle of a forest, with an old abandoned nearby house that houses a 300-year-old curse.

Campfire Story #4 is the wraparound story for Tales from the Campfire and is the only part of the film with modern look and feel. The story concludes around the campfire with a mixture of slasher elements, suspense, and occult when the truth is revealed behind the events of the campfire stories… except for one the Campers did not see coming.