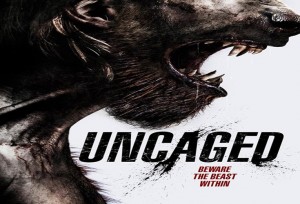 Daniel Robbins’ Uncaged has a lot of excellent things going for it. However, for every strength the picture boasts, there’s a hiccup bound to diminish the opinions of viewers. For a micro-film it’s solid, utilizing an interesting story to lure viewers in, and working to keep them invested with slick transformation scenes and passionate performances. But the pitfalls… well, they ultimately damage the production and preventing it from rising to great lengths.

The story sees a trio of friends head for a remote cabin for a weekend of rest and relaxation. However, that relaxation is immediately done away with. On the first evening crashing in this humble abode Jack experiences something far out of the norm. He wakes the following morning in the nude, far from the comfortable bed in which he rest his head just hours prior. He’s confused and frightened. But in order to gain a firmer understanding of the night’s happenings he devises a plan.

The following evening, prior to laying down to sleep, he straps a GoPro camera to his head. If he’s going to wake in the middle of the night and embark on a little sleepwalking adventure, he’d like to know precisely what occurs. The following morning – after once more waking in the nude in a foreign place – he heads for home, GoPro still wrapped around his melon. He now has video to reference and what he finds is disconcerting on too many levels; it appears the man, during the evening, undergoes some animalistic change, physically morphing into a monster of some sort. But even more jarring is what the video footage eventually displays: Somehow, Jack has transformed into a werewolf… even worse, he’s brutally slaughtered a man in the process.

What follows is a mission to answer the crucial questions: How, why – and most relevant – how can he prevent this mortifying transformation from occurring?

Anchored by superb performances from a group of green thespians (Ben Getz, who plays Jack; Kyle Kirkpatrick, who plays Turner; and Zack Weiner who tackles the role of Brandon), Uncaged offers quite a bit to fans of lycanthropic tales. It also features some stellar make-up work and a very respectable transformation sequence. 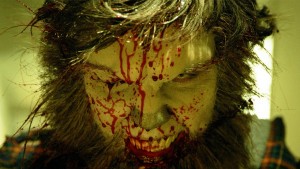 But the film, sadly, falls apart as writers Mark Rapaport and Daniel Robbins insist on constantly introducing meaningless subplots. We’re talking extensions of a story that have no place in the picture. These twists quickly deflate the air in the sails, as viewers grow bored and confused, simultaneously. The worst part of it, really, is the fact that these subplots are entirely unnecessary. It is established early that our attention should be placed on the focal trio, but as the picture progresses a number of other bit players are introduced – not unheard of – and subsequently, we’re essentially asked to care for these part-timers, as we’re inundated with their backstories and origins. The decision steals away from the point of focus – those three, humorous and likeable gents – and works to slow the momentum to a great degree.

Uncaged has heart, and thanks to young performers Getz, Kirkpatrick and Weiner, and some wildly successful humor (Robbins and Rapaport earn big credit for writing some seriously funny dialogue), it’s nearly impossible to do anything other than enjoy the production. Until those senseless angles wriggle their way into the production, robbing us of an otherwise endearing film. Had Uncaged been trimmed by 15-minutes, discarded the subplots that serve as obvious time filler and embraced the straight forward nature of the narrative, we’d be discussing a charming micro-film. As it is, it plays out more like a schizophrenic cinematic experiment that misses as much as it connects.