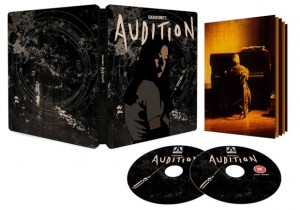 Synopsis:
Seven years after the death of his wife, producer Shigeharu Aoyama (Ryo Ishibashi) and his colleague Yasuhisa Yoshikawa (Jun Kunimura) set up a fake film audition with the ulterior motive of finding Aoyama a new girlfriend. Through the screening process, Aoyama meets Asami (Eihi Shiina): a shy, former Ballet dancer with a heart-breaking past, a mysterious demeanour and a deadly penchant for acupuncture.

After nearly a decade of directing straight to video features, twisted visionary Takashi Miike finally got the recognition he deserved when in 2000, his 30th feature (not counting TV mini-series Tennen shojo Man) Audition, premiered at the Rotterdam Film Festival (along with two more of his productions: Dead or Alive and Ley Lines). Audition was a triumph, prompting a record number of walk-outs during its notorious finale and nauseated audience members to spit abuse at the director (which Miike took as a compliment). Audition received a much wider distribution than his previous features and served as a fitting intro to Miike’s cracked, quixotic genius/ oeuvre. 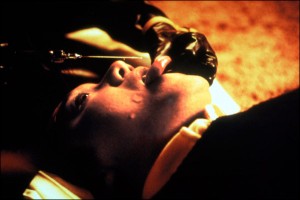 The story starts as a touching drama about a middle-aged widow Aoyana’s longing to love again after years in mourning. This tender tale is measured and beguiles but it’s also adorned with light comedy and an endearing, affable nature. Emotive moments between Aoyana and his son Shigehiko (Tetsu Sawaki) contribute to leading the viewer into a false sense of security. While the audition process is presented as a jovial tableau with a springy score, where unwitting women skip, flit and strip then answer euphemistic questions tailored by Aoyana, to determine whether or not they would make suitable partners. But when Aoyama meets Asami he becomes precipitously enchanted, pacified by her temperament, captivated by her reticent nature and confounded by her beauty/ tragic backstory. Dinner dates and trips away soon follow along with scenes featuring Aoyama resisting calling Asami through fear of seeming too keen.

Audition unfurls as an emblematic rom-com for the better part before twisting into an agonising nightmare. The horror slithers in like a virus contaminating the lathered sentiment without foreshadowing what’s to come along with ominous music or plot devices. Given his rebellious temperament, Miike exercises significant restraint, conforming in the guise of a regular director before the cracks start to appear and the madness seeps in. Curiously unnerving moments unify into logic for a traumatic culmination which even Rob Zombie cited to be the most unsettling he had ever seen (when Asami gets her cracking set of pins out). Scenes featuring the furtive antagonist slumped next to an ominous looking sack and a bowl of dog vomit while warped, haunting dream segues and plot facets connect supporting character backstories. Last minute narrative swerves and fantasy dips, veer the story into alternative universes to suitably discombobulate and make the horror more effective when it finally arrives.

Audition has been interpreted as both misogynistic and pro-feminist, but it’s probably neither. Miike aficionado Tom Rayns believes it “perceives a gap between the sexes and sets out to explore it” but given the nature of Japan’s liberal attitudes towards sex and feminism in which, as Rayns states in the extras, “there is no feminism other than empathy for suffering women”, chances of Audition being a pro-feminist film are highly unlikely. Asami struts in the mode of an officious femme fatale during the finale, seemingly up to speed on the surface but deep down she is unquestionably cracked beyond repair. Audition also prophetically highlights the dangers of courting strangers, as a product from a pre-speed/ internet dating age, which in a way makes it a product of its time. But there is no denying Audition’s power as a drama, addressing the universal themes of love and death, and as a commanding, clandestine horror with a crippling sting in its tale. 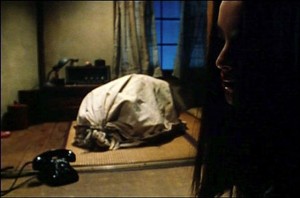