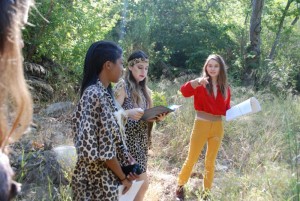 Think there’re no new avenues for the slasher film to explore? Think again, because BC Butcher takes slice ‘n’ dice back to the stone age. Set for release through Troma’s subscription-only streaming service TromaNow, the bonkers-sounding film was directed by the awesomely-named Kansas Bowling when she was just 17. Now 19, Bowling is the first inductee into The Troma Institute For Gifted Youth, the latest brainchild of Troma President And Creater Of The Toxic Avenger, Lloyd Kaufman.

Shot in her Dad’s backyard in Topanga Canyon, California, Bowling’s film was the result of a childhood spent watching Troma films, and a love of The Texas Chain Saw Massacre. Something she refused to compromise on was shooting on 16mm film, so influenced was she by the look of Tobe Hooper’s classic shocker. Further influence lies in Bowling’s appreciation of 1960s music and fashion, and films such as One Million Years BC. Part-funded by Kaufman, the remainder of her film’s budget was raised by an indie go-go Kickstarter and from Bowling’s job waiting tables in a Vietnamese restaurant. 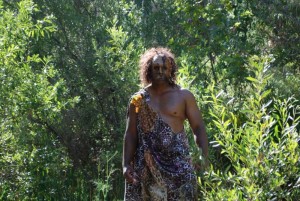 Billed as “The first prehistoric slasher movie”, BC Butcher tells of a cavewoman who is slaughtered by her all-female tribe. Discovering her body, a folkloric man-beast falls immediately in love and sets out to avenge the death of his scavenged bride in a very bloody manner.

Early word on BC Butcher is of a joyously gory romp with a well-crafted story, made very much in the campy, riotous Troma tradition.