Sad, sad news came in yesterday, that while Hollywood was busying itself with Oscar news, veteran actor George Kennedy passed away in Middleton, Idaho. He was 91. 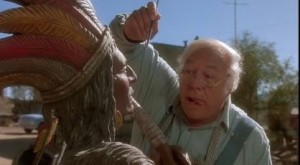 Already a seasoned TV actor when film roles started coming his way in the mid-‘60s, Kennedy is probably best remembered for Cool Hand Luke (for which he won a best supporting actor Oscar) and his later comedy roles which included the Naked Gun series. He was however, no stranger to horror, with early roles in William Castle’s 1964 psycho-melodrama Strait-Jacket, and alongside Bette Davis in Hush…Hush Sweet Charlotte (1964). 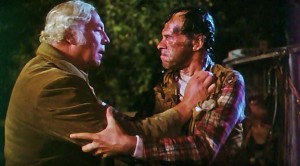 Throughout the 1980s Kennedy balanced comedy roles with appearances in horror films, kicking off the decade by starring in Death Ship (1980) and Jeff Liebermann’s superior backwoods slasher Just Before Dawn in 1981. Before the ‘80s was through, Kennedy would also star in Creepshow 2, Demonwarp, Death Street USA and The Terror Within.

A gentle giant with a winning smile and a velvet voice, Kennedy’s last film role was in Rupert Wyatt’s high-profile crime drama The Gambler. He left us early Sunday morning due to natural causes, leaving a rich screen legacy.