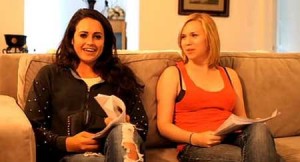 Synopsis:
A group of friends head out on a night they’ll never forget when they decide to visit the locations of famous Hollywood murders. When they manage to gain access to one particular house they find the door slam shut behind them, and find themselves trapped as boarded up windows and doors prevent them from escaping.

I didn’t want this to be one of the worst films I’ve ever seen, but it was. Alarm bells immediately rang when I discovered this was a sequel to Knock Knock – not the Keanu Reeves- starrer directed by Eli Roth (God forbid) – but a film from 2007. From what I can tell, however, this “sequel” has no connection to the original at all, so being unable to follow the story is not what you should fear when you pop this on one Friday night. What you should fear is the tediously dull story with its complete lack of suspense and horror. In fact, 1666 has almost no redeeming qualities at all and was an excruciatingly painful experience to watch. 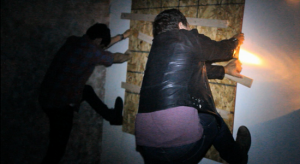 1666 opts for a found-footage style of filming to ramp up the realism, but never does the film use it to its full potential. Rather than give 1666 an opportunity to frighten its audience, the found-footage aspect emphasises just how terribly ordinary and dull the film is. Rather than heighten the film’s concern with being rooted in realism, the found-footage aspect actually pushes the film away from authenticity and straight in to fantasy. As with so many other films like this, the characters film at ridiculous moments and manage to secure great close-ups when they should be more concerned with their friends disappearing. It’s impossible to suspend your disbelief when a film is trying as hard as this to be telling a “true story”.

Usually with these films it’s easy to poke holes in the acting. With 1666, the characters aren’t the worst part. They’re uninspired, stereotypical ideas of young people, but they’re not hateful. The guys like to make jokes about sex and the ladies act like children, but it’s forgivable. There’s something likeable about this group and they do gel well on-screen. The script the actors are handed, however, is a different story. Much of the dialogue is cringe-worthy and far too much time is spent with the characters insulting each other and getting in to arguments about who’s to blame for their dire situation. There are times when it seems as though the characters are reading directly off a script as they tell the true, bloody stories that occurred around them. They legitimately seem to trip over the words as if they’re reading them for the first time, which may be intentional to, again, enhance the idea of the situation being “real”, but it doesn’t work and makes the film feel amateurish. 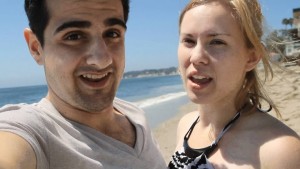 Mainly, 1666 gets a massive thumbs down for its complete lack of action. It’s difficult to explain just how boring this film is, but when I say nothing happens, I mean NOTHING happens. Almost the first 50 minutes is made up of the group standing in front gardens, perching on door steps and peering in the windows of empty houses as they read the tragic events that unfolded there. In an attempt to mix up the gender roles, it is the women who are preoccupied with the morbid and the macabre, and the whole evening was their idea. The men are the ones who get cold feet and beg the girls to get back in the car after every house visit. Why were they so scared? I have no idea. At no moment did any of the houses pose any threat – unless a barking dog from down the road terrifies you to your very soul – or was anything spooky ever implied. The back and forth dialogue during these moments was embarrassingly bad and I willed the meagre 82 minute run time to speed up.

When the group finally enter the house which is said to be filled with horrors, I thought “finally!” However, this excitement was short-lived when I realised there was barely 20 minutes of the film left. How exactly are they going to suitably and satisfyingly kill off 4 people in this time? The short answer is that they don’t. They all manage to disappear or die, but every moment happens off-screen and that is unforgiveable. To boldly announce that all the characters “remain missing” at the beginning of your film and then take away an audience’s enjoyment of the moments where they disappear, is shocking. Off-screen screaming is just not good enough. There is absolutely no build-up of tension as the film edges towards its finale; we’re never given a good look at the ghost or spirit or entity that resides in the house and, as mentioned, there are no gory deaths or scares or horror.

Before you decide to knock, knock on 1666’s door, think again, because there’s nothing to enjoy within these walls. This really is a poor, uninspired void of a film that suffers from a complete lack of creativity and refusal to commit to its ghostly premise.