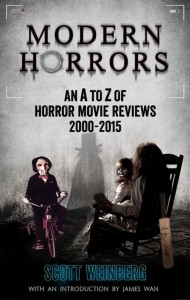 As a librarian, I’m naturally a bit obsessed with reference books, and in particular, horror reference books. When I was too young to see horror movies, I could still read books about them, and based on the plot description I would let my imagination do the work. For a good number of movies, I’m sure the dread-filled images in my head were better than the actual movies turned out to be.

So with that in mind, I’m always on the lookout for new books about horror movies. And who doesn’t love a good list book? My personal preference for horror is anything from the eighties, so I’m branching out to see what I can discover with Modern Horrors: An A-Z of Horror Movie Reviews 2000-2015 by Scott Weinberg. For those not familiar, Scott Weinberg is a well established film critic writing for numerous websites. This book is an A-Z list of over 800 horror movies that were released in 2000 or later. First of all, that’s a lot of films covered. It’s a mix of independents, big budget offerings, and U.S. and international releases. The reviews are at least one page long, so you’re getting more than a peripheral examination of each title, with some of the more interesting films earning longer discussions.

The author has very strong opinions. He’s a critic; that’s his job. There are always going to be reviews that I don’t agree with. How much you enjoy a movie is a matter of taste and everyone is entitled to an opinion, so I don’t get up in arms if a movie that is horribly reviewed is one that I love. Weinberg is passionate and entertaining throughout and there is a good bit of humor, especially when covering the movies he clearly thinks are terrible. I feel the pain he must have gone through when watching terrible movies like I Know Who Killed Me and The Scorned. The reviews are never dry. For example, the opening to his Book of Shadows: Blair Witch 2:

If “earth-shatteringly dull” is a term you like your horror movies described as, Blair Witch 2 is for you.

I don’t want to give the impression that the book is full of negativity, as that is not the case. The movies he likes, he likes (even if horror snobs would consider them unfashionable). I really enjoyed the focus of the book. There are lots of gems from the past 15 years that I now know I need to catch up on. It’s also a look at where horror has been and where it’s going, with nods to the reassuringly excellent films that have come out over the last 15 years, such as 28 Days Later, Dead Snow, It Follows, and The Babadook to name a few. Thankfully with these recent-ish movies, there’s a good chance you’ll find them on a streaming service. If I had one criticism – well, suggestion for improvement really – it would be to add some images or posters. The book is entirely text. What you’re getting with this book is a thorough guide that’s a joy to flip through and a useful companion when browsing Netflix.