All Hell Breaks Loose in this gloriously grimy trailer 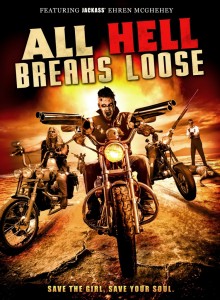 March 22nd sees the US release on DVD and Digital HD of Jeremy Garner’s All Hell Breaks Loose, through Wild Eye Releasing. A full-bore exploitation throwback, the flick was funded through Kickstarter, and features gratuitous lashings of bikes, Satanism and revenge.

The synopsis bills the film as A story of love, leather, and violence. When the Satan’s Sinners, a vicious motorcycle gang from hell, kidnaps one man’s bride, they bite off more than they can chew. Now the man is out to save his wife, any way he can… even if it means dying over and over again. With the help of a shit-kicking sheriff, a perverted priest, and a cowboy who just might be God, all hell is bound to break loose. 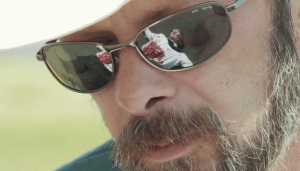 Early word suggests All Hell Breaks Loose is a riot; a respectful homage to grubby ‘70s biker films filled with memorable, grindhouse-esque characters and impressive practical effects. It’s certainly difficult to resist the charms of the gloriously nutty trailer (see below), which thankfully, looks more Dear God No! than Hellride. Here’s a few stills from the film too.

Keep your switchblades crossed for a UK release soon.