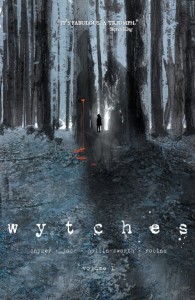 The first volume of this graphic novel will turn the majority of the lore that you know about witches on its head. Or make that wytches – as they are referred to here. Sailor Rooks has been cursed, or rather “pledged” to the wytches of Litchfield, New Hampshire. Once you are pledged they will mark you, and they will come for you, and they will take you. We follow the story of Sailor and her family as they discover what this means and fight to survive.

We quickly learn that the Rooks family has experienced a number of unfortunate traumas before even moving to Litchfield. They are deeply sympathetic characters. This is especially the case for our two major protagonists, 13 year old Sailor and her guilt ridden father, Charlie. One of the most intense fears is the terror that a parent feels when their child is endangered, and that is heavily prevalent in this story. 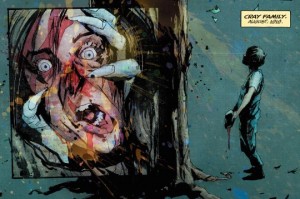 As I read Wytches, it felt reminiscent of the transformation and reinvention that Steve Niles’ 30 Days of Night series provided for vampires and their lore. He made them feral and frightening again. These wytches are not seductive temptresses but vicious animals. What we learn of the wytches creates a powerful and exciting new mythos, ranging from how pledging works to where the wytches reside. There are still cauldrons used to cook children and create magic but that is where the fairy tale nature of witches ends. Their special blend of magic creates a web of intrigue, as it is based on offering great rewards to the humans in league with them. Thus, we have betrayals and some surprising twists. 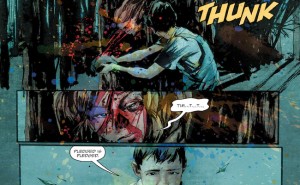 The art perfectly completes the powerful story. The feral nature of the wytches is captured magnificently as is the pain and emotion of our lead characters. The coloring is also noteworthy and pretty unique, with every panel speckled with colors over the actual drawing. It’s an atmospheric technique that adds additional quality to the story. The book wraps up with a gripping conclusion and I can’t wait for the next volume. If you’re not really into graphic novels, this could be the book that could change your mind and get you hooked.