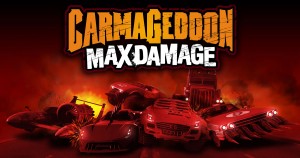 If like me, you have fond, late-‘90s memories of cheerily mowing down men, women and cows in a weaponised vehicle, then I have some good news for you. Carmageddon: Max Damage, the latest title in the gleefully violent video game series will be with us before the year is out. The timing couldn’t be more perfect, with the recent news that Death Race 2050 is also due this year.

Taking clear cues from Death Race 2000, Carmageddon burst onto the gaming scene in 1997 like a maniacal tweeker with a blood fetish, and was promptly banned, censored and renounced around the world. In the UK, pedestrians became zombies, their spilled blood changed to a far less offensive green colour. On appeal however, the uncensored version was released. What made Carmageddon so great was its anarchic sense of glee at the perpetration of such mindless violence. There was a cheery sense of childish mischief to proceedings that made it far less disturbing than the moral guardians of the day would have had you believe. 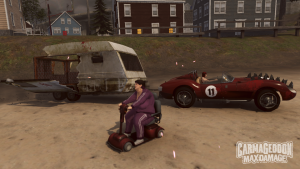 Carmageddon: Max Damage will feature 30 playable vehicles and 10 environments. While the aim is still to dispatch opponents, pedestrians and animals in the most brutal manner possible, the new game will have a career mode with six different types of event. It will also include a multiplayer mode with four event types and an action replay feature.

Developers Stainless Games have announced that Carmageddon: Max Damage will be available sometime in 2016 for PC, PS4 and Xbox One. The spirit of the original

Carmageddon is alive and well in the game’s trailer, which you can watch below.