THE WITCH WHO CAME FROM THE SEA: Film Review 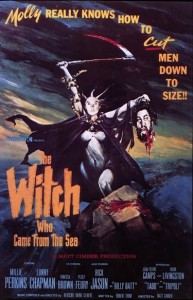 Synopsis:
Bar-maid Molly (Millie Perkins) drifts into fugue states then embarks on a killing spree after repressed memories of her childhood resurface.

Director Matt Cimber’s calm psycho drama from 1976 projects a cold tranquility while alleviating the tension of Robert Thom’s screenplay. TWWCFTS could have been blandly adapted as a grimy, exploitation flick at the time given the nature of indie, horror film-making in the 70s (abusive/gialli/ home invasion) but Cimber sacrifices suspense and instils an air of diverse deviance that’s more flattering to the tale.

Embellishing the delicate innocence of youth in the source/ protagonist makes TWWCFTS feel like a proto-mumblecore thriller more comparable to the likes of Let’s Scare Jessica To Death, Hush…Hush Sweet Charlotte and Who Slew Auntie Roo? This is achieved via a soft, muted palette, serene demeanour and knack of unnerving at a more primal level without lunging for the throat via extreme, angry violence or blood-drenched exposition.

TWWCFTS crows moments of stark horror that, while at first, seem dreamy and sophisticated, out of context they are deeply disturbing, prompting the censors to slap the film with an X rating before Cimber made cuts. The fact that TWWCFTS is so stylistically matchless makes it more of a shame that it slithered into obscurity after most of the original prints were destroyed by Hollywood Labs (who went bankrupt shortly after production). Thanks to Arrow, TWWCFTS has been restored to a watchable condition for it’s blu-ray debut in the American Horror Project box-set.

While swanking a decent story, performances (Millie Perkins is exceptional as Molly) and cinematography from Ken Gibb and Dean Cundey (who later worked on Halloween) using anamorphic lenses, TWWCFTS frequently saunters through scenes that don’t really drive it, develop the characters or contribute to the overall mood. Yet it remains a beguiling work with redolent, remarkably rendered fugue-state sequences augmented by distorted, illusory sound/ slowed down dialogue and mesmeric visuals, while kill scenes are coloured with cartoon blood blasts.

A curious subtext about the manipulative power of television simmers beneath the surface story. It’s subversive for the subgenre/ time and informs TWWCFTS with a fitting depth. Molly’s kills are often triggered by TV commercials, conversations about celebrities and corrupted memories of watching a black and white TV clown as a child: the main reason for her disposition relates to her upbringing. “Television makes people so much kinder doesn’t it?” asks a cop investigating the murders, before later instructing a character to “turn on your television” and “find out what’s happening in the real world”.

Molly targets sports stars and celebrities for sex and death while resurfacing memories of her sea-captain father dot the tale with gist and bearing. Robert Thom’s screenplay, written from his hospital bed for his then wife Millie Perkins (Molly) to star in and help pay for his treatment, remains succinct and wistful despite wandering, and the beautiful score by Herschel Burke Gilbert, marinades pan-pipes to wave crashing seascapes, contributing to the transient stillness but, along with the execution, softens the horror instead of sharpening it. Meanwhile, supporting oddballs like the tattoo-faced Jack Dracula (Stan Ross) and arse pinching bar manager Long John (Lonny Chapman) inject a threatening edge. 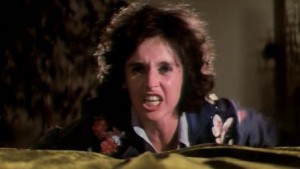 “The terror and horror you inflict on youth, never leaves them” states director Matt Cimber in the extras while explaining the relevance of the story’s nucleus/ film title which is also explored in a description of Botticelli’s painting “The Birth of Venus” alongside Molly’s connection to the ocean. TWWCFTS has many commendable facets that make it stand out from the crowd of lesser subgenre entries of the time, but it’s a flawed yet unique and curious production, with a rambling screenplay and some slight, superfluous characters.

Extras on the disc include a retrospective doc called “Tides and Nightmares” in which Matt Cimber, Millie Perkins and Ken Gibb look back on TWWCFTS. “A Maiden’s Voyage” combines archive interview footage with the director and cast, while “Lost at Sea” features Cinder reflecting on the film’s production. The disc also features a cast and crew audio commentary.