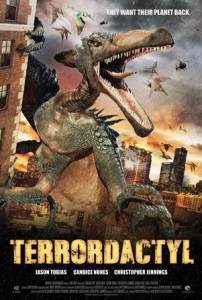 In the style of such films as Sharknado, Big Ass Spider and Lavalantula, Don Bitters and Geoff Risner’s Terrordactyl takes audiences on a prehistoric joyride into hell where downtown Los Angeles is plagued by a deadly swarm of pterodactyls from space.

Terrordactyl is another in a long line of straight to video shlockbusters. Like most B-Movies it might be played straight but it also carries a slight charm that cements a keen sense of fun for the audience. Sharing the directors chair Don Bitters and Geoff Risner have delivered a fun movie but clips the wings of terror by suffering more than a few unforgettable blunders along the way.

It’s a mystery as to what but there was something about this film that held my attention. The film is shot incredibly well and looks great on screen. Both Bitters and Risner display a n eye for detail but everything else fails. I might sound a little too negative here but I have a great deal of respect for the current trend of B-Movie throwback films and this one left me disappointed. I appreciate that films like this are forced to work with an incredibly limited budget but films like this only succeed if the team involved do their best to keep the audience entertained.

Yes, I am aware that Sharknado was a bunch of set pieces roughly sewn together but it was incredibly fun to watch. Terrordactyl follows the same trend but is hindered by by a cringing script, substandard performances and repetitive action scenes that lack any real impact. That said, I can see in parts that Terrordactyl does try to entertain audiences but it tries too hard to emulate pretty much everything that made Sharknado an unsung success but in doing so Terrordactyl pales in comparison. 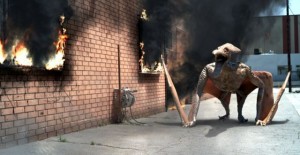 That said, the creature effects are not that bad. The creature effects look convincing enough at times and appear to be entirely CGI. They are creative and hold their own against the works of SyFy and The Asylum but are not enough to keep the film afloat. The cast seem to interact with the creature effects well but in close up shots there are a few moments where the Terrordactyls look like the filmmakers took inspiration from The Flintstones (1994).

So if you fancy taking a flight right into an action adventure that attempts to combine ‘Sharknado meets Jurassic Park’ then you could do worse than Terrodactyl. But if like me, you are looking for a B-Movie that offers all the thrills and chills of Big Ass Spider then look elsewhere as this film will leave you bitterly disappointed.