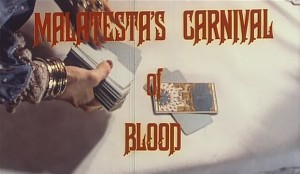 Arriving as part of Arrow Video’s American Horror Project: this curiously bungled grindhouse style flick from 1973 successfully conjures a pensive unease via scatter-shot camerawork and an abstract score, while its slipshod production and sozzled editing mends for a mad and jabbering mess. The pulp of supernatural/ slasher subgenre traits sometimes coalesce nicely but MCOB’s fragmented suspense would work better if deployed in a story with a much more linear structure.

Background players dot the milieu, shimmying into focus when the story requires, but the herd of subordinate freaks are mostly superfluous, underwritten and miserably play-acted by the amateur cast: with the exception of Bobo the gun-toting dwarf (Hervé Villechaize/ Fantasy Island, The Man With The Golden Gun and Forbidden Zone). Mr Blood himself unveils some interesting character traits in the final third, injecting some much needed intrigue into the disarray but most of the other weirdoes are surplus, including the hook-handed Mr Bean (who clearly has his sleeve pulled up over his fist) and a grinning, green-faced gardener who won’t stop raking. It’s a crazy ensemble yet you wish the characters were more expertly crafted or starring in a much better film. 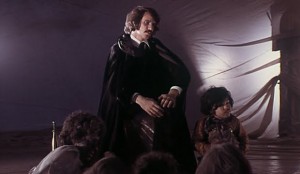 Grousing cannibals flounce like zombies or a horde of malevolent drunks while other oddballs are mentioned yet never materialise. Gilda the bearded giant and a two headed giraffe are teased in talk but were probably too majestic for the budget to realise on screen. Choir-singing cannibals masticate on a ripped open carcass while funky gore blasts (courtesy of producer/ SFX man Richard Grosser and James Lambert) are convincing but mired by bad lighting and flunky direction. As a result, MCOB feels often inebriated and lacerated from a more coherent work. At a brisk 74 minutes it’s befuddling and flagrantly botched (any longer and it could have proved arduous) yet it’s never monotonous. The twitching, withered celluloid is a key grindhouse trope (Arrow have done an incredible remastering job as per usual) but MCOB plays like an experimental art project due to its surrealist elements and (probably) chance incoherence. An anarchic bombardment of nightmarish imagery and crudely crafted carnival contraptions also serve as centre pieces for key suspense sequences.

The mysterious Malatesta, or “the man with 1000 faces”, doesn’t arrive until the finale to reveal his face of madness to the ubiquitous Mr Blood, but this also occurs off-screen. We only see Blood’s reaction. Unusual sound design instils a Lynchian temper and a suitable sense of unease while dream sequences evoke Mia Farrow’s nightmare from Rosemary’s Baby. Swirling visuals set Christopher Speeth’s film apart from the generic exploitation fodder of the time. Ham acting and a shoddy production make it a mostly confusing and MCOB ultimately chafes the subconscious like a mutant flu or abstract, animate smudge, resonating more as a cryptic mood piece. There are enough nightmare moments to make it often entertaining and it’s still much more interesting than many of the cash-in remakes/ stock sequels, but script linearity, ingenuity and extra character development would have made MCOB more manageable. 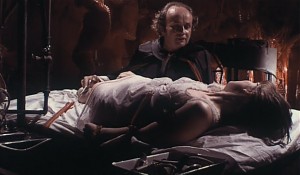 Extras on this disc in the first American Horror Project box-set include; “The Secret of Malatesta”, an interview with director Christopher Speeth, “Crimson Speak” an interview with writer Werner Liepolt, “Malatesta’s underground” interviews with art directors Richard Strange and Alan Johnson, and an array of outtakes, stills and an audio commentary by film historian Richard Harland Smith.