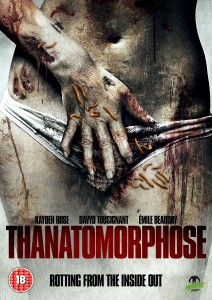 Synopsis:
A journey of degeneration of the flesh, told in the style of Jorg Buttgereit.

The flesh: it’s what we know. It’s what we’re first aware of from the earliest moments of life. It’s also what we feel until the moment we die. As one review of Clive Barker’s ‘Books Of Blood’ stated, “Be thankful if your skin crawls. It means you’re still alive.” Indeed, what’s more terrifying than our flesh betraying us? What ties someone up more than the thought of the flesh rotting away—while we still breathe?

Thanatomorphose is a film that isn’t just about the flesh, but a journey of degeneration. We follow a young artist trapped in a world of constant failure, ridicule, abuse, and isolation. Much to the film’s credit, it manages to focus the entire narrative in an isolated location; her apartment. In some ways, it brings us back to experience of watching Repulsion for the first time, keeping the terror in a confined setting. We, the audience, are the ultimate voyeurs as we watch this central character rot before our very eyes. Aside from the gradual deterioration of her flesh, there exists a character arc. Beneath all of the visceral imagery, we see her personality transform as her body deteriorates.

The similarities between this film and Roman Polanski’s masterpiece end there. This work is strongly influenced by avant-garde Super 8 Auteur Jorg Buttgereit. The narrative progresses much like Der Todesking, and several scenes can’t help but make us think of Nekromantik. Much like many of Buttgereit’s works, it has a dissonance in presentation. The distinct use of low-fi color, little music, and low-key lighting give this film a melancholy atmosphere, which is something you donlt see to often these days. It’s rewarding to see so much emphasis on setting the tone, and not just throwing images at our eyes.

In recent years several films like this have emerged. These have been works that are being told in the style of filmmakers from the past. This is one of them; someone taking the techniques and imagery from previously released works, and utilizing them to tell a brand new story. There’s a clear difference between plagiary and homage, this film falls into the latter. Beyond the image, there’s a captivating story here, you just have to look beneath the surface.