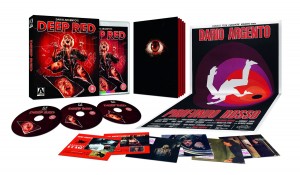 Synopsis:
Brit jazz pianist/ composer Marcus Daly (David Hemmings) gets enmeshed in a murder investigation after witnessing the grisly killing of a local psychic. Further slayings occur and Marcus follows the clues across Italy with kooky Journalist Gianna Brezzi (Daria Nicolodi) in the hope of clearing his name and unmasking the elusive black-gloved psychopath responsible.

After his early 70s “animal trilogy” (The Bird with the Crystal Plumage, Cat o’ Nine Tails and Four Flies on Grey Velvet), Dario Argento briefly dabbled in comedy with Italian revolution based blunder Le Cinque Giornate (The Five Days of Milan) in 1973 before returning to giallo with a vengeance two years later (as though repenting for his erroneous deviation) to deliver Deep Red: his ultimate tour de force. With its rustic Italian settings, warbling score, eye-twitching suspense and, sumptuous crimson visuals, this fervently gruesome death medley is lovingly crafted to atone, creep-out and slowly astound, while serving as a startling stand-alone oeuvre and an aide memoire of Argento’s towering prowess.

Following a sinister opening credit sequence, broken by a nursery-set/ music box killing, the story unravels with a salty jazz score: introducing protagonist Marcus at ease in his element as musician/ teacher, before twisting him into the role of amateur sleuth as the killings commence and events take a turn for the terrifying. The story delivers smartly hewed death and torture sequences to punctuate the plot and serve as exquisite visual delicacies for gore fiends to feast upon. Argento weaves macabre facets with a confounding surrealism to augment the dream-like aura evoked by the visuals. Vicarious images go some way to compensate for the over-theatrical dubbing and aptly energised physical acting/ anarchic gesticulations while Goblin’s progressive rock daubs the background like the sound of a circus going mad under water. Meanwhile wandering POVs and illusory diversions, like the camera crawling over a black cloth coated with scattered clues and death paraphernalia, eludes and beguiles.

People are stabbed, hacked, drowned, beheaded, boiled, and mowed into pavements by sauntering trucks but the film still feels far from gratuitous due to its eminent design, lovable characters, vibrant performances and Goblin’s score, which melds to make Deep Red upbeat and amusing as well as exciting and terrifying. Dotty humour inculcates a playful air with comical flirting between Marcus and Gianna and endearing, comedy pratfalls. Many of the late night Turin exteriors rift on high-art masterpieces. Dimly lit diners act as the backdrop of street altercations while emulating the fatalism of Edward Hopper; augmenting silent spaces between scenes and the uneasy encounters that followed them. The opening psychic phenomenon conference also instills an otherworldly air which is prominent throughout, coalescing perfectly with the crimson auditorium while worming in supernatural slithers and a devastating sense of unease.

It’s hard to imagine a more fuller, finer package than Arrow Video’s mighty new 3-disc limited edition of Deep Red which includes a High Definition Blu-ray (1080p) presentation of two versions of the film (director’s and theatrical cut), a 28-track CD featuring the entire score by Goblin and composer Giorgio Gaslini. Also included is a reversible fold out poster and lobby cards, Profondo Giallo – a brand new visual essay by Michael Mackenzie featuring an in-depth appreciation of Deep Red, its themes and its legacy, along with many other morsels including a limited edition booklet with new writing on the film by Mikel J. Koven, and an archive piece by critic Alan Jones. This 3 disc set would make a fantastic gift for someone you want to introduce to Deep Red for the first time. Or simply buy it for yourself and give away your older copy.