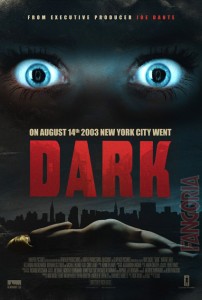 Screen Media has acquired the US rights to producer Joe Dante’s (Gremlins, Burying The Ex) Dark. Directed by Nick Basile, Dark follows a woman who must confront her fears when she is trapped during a blackout in New York.

Synopsis:
Kate, a struggling 30-something model with a troubled past, has just moved into her girlfriend Leah’s Brooklyn loft, but already doubts about their relationship have begun to loom. When Leah leaves for the weekend, Kate unexpectedly finds herself alone in the apartment in the midst of the worst blackout in North American history. As darkness falls over the city, Kate’s paranoia grows and she begins to believe someone in the building is stalking her. With no one to help her and escape out of reach, Kate is forced to confront her deepest fears as she fights to survive through the night.

Dante’s Renfield Productions has nabbed the film which stars Michael Eklund, Brandon Sexton, Whitney Able and Alexandra Breckridge. Dark was part-funded by Kickstarter and is based on the New York blackout from 2003 which lasted only for a few hours in some areas, but others were without power for up to a week.

It’s clear to see why this could make a great horror film; with Kate’s increasing paranoia set against a power-less city, it does leave a lot of potential for something truly terrifying.