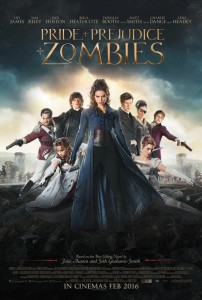 Synopsis:
Jane Austen’s classic tale set in 19th century England, about the tangled relationship between lovers who must face an army of undead zombies.

Classic English literature is not renowned for its monsters, apart from maybe Beowulf & Frankenstein, and many titles lend themselves to other genres – Cold Comfort Farm (animals trying to keep warm in the winter?), The Wind in the Willows (flatulence in a forest?) and the less said about ‘Of Human Bondage’ the better.

So monster mash ups are very much of the day, with Pride & Prejudice & Zombies leading the charge. The classic Jane Austen novel is pretty well known from numerous TV adaptations and with the story set in the 19th century it follows the initial resentment between Elizabeth Bennet and Mr Darcy memorably setting housewives hearts a flutter when Colin Firth in the BBC adaptation emerged from a lake in a 19th century version of a wet T shirt competition which oddly has been missed from this version. Here instead we have a steely eyed Sam Riley looking like a sober, drug free Pete Doherty in the leading role.

With the film still focussing firmly on the love story, this has both protagonists battling the class system as they fight marauding zombies who are trying to invade London (which is protected by a huge wall).

After the novel appeared in 2009 it was optioned almost immediately by Natalie Portman who was originally slated to star in the film. However it has since gone through many directors hands (including David O Russell and at one time even Jonathan Demme and Neil Marshall were shortlisted) before it fell to Burr Steers, a director with little horror in his back catalogue, being better known for his comedy. Fans grew even more concerned when it was revealed that this was not going to be a full on hardcore horror experience especially since the graphic novel itself has some particularly gruesome slayings (throttled by your own intestines anyone?). Even more worryingly having been developed from a novel by Seth Grahame Smith whose own back catalogue has included Abraham Lincoln: Vampire Hunter (boring) and Tim Burton’s ‘Dark Shadows’ (even more boring) fans may be rightly wary but thankfully director Burr Steers has taken over the writing reins and done a decent job here rewriting the previous incarnations of the script and plays it absolutely straight with no sly winks to the audience and many of the laughs coming from the juxtaposition of zombie slayings against 19th century class manners.

Exceptional amongst the cast are Matt Smith as a suitor for Elizabeth Bennet and Sally Phillips as her mother, both giving comedy master classes.

So what of the zombies? The make up is especially good with flesh having fallen off zombies faces revealing jaw bones and teeth and this is as violent as a UK 15 certificate will allow, with zombies heads getting blown off in vision, limbs lopped off and even a brief brain munching sequence but fans expecting to see full on Romero type evisceration will be disappointed. The certificate has meant that at times we get zombie POV shots (though the way it’s shot here seems that they all suffer from cataracts) to get around the bloodletting.

But this really is more in the vein of comedy horror than full on scares and though it is perhaps a little too long if you go in with the right attitude as to what to expect you shouldn’t be disappointed.