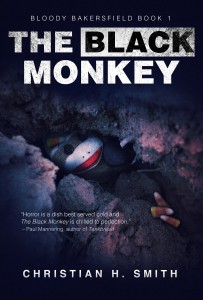 The tale begins with a long tradition of burying a stuffed monkey on Halloween to ward off evil. It’s a tradition that’s gone on for a hundred years, but it has become just an excuse for the younger folks in the town of Bakersfield to let off steam and drink. Only, on this Halloween night, evil has returned and a serial killer is prowling the streets.

As each holiday rolls around in Bakersfield a new murder takes place and the police are powerless to stop it. The only thing linking the murders is that they are all killed on holidays, so the killer is dubbed the Holiday Killer, while others call him the Snowman.

Our two protagonists are Mark and Jess. The story is presented from the perspective of ten-year-old boys, which is an interesting and unusual method of delivery. It immediately puts you in their corner. They are young and don’t understand a lot about the world. They also have the same issues to deal with that most kids do – parents not listening or being overly controlling, and issues with their peers as they enter the uncertainty of puberty. Of course the norm is that children are safe in horror for the most part. Not in this case though, as children do fall at the hands of the killer. Jess and Mark’s lives are very much in danger.

There is a common theme of families in crisis. There is the community-wide crisis of the deaths and the fear and curfews are really effectively portrayed. The community’s reactions to the murders are varied and realistic, with some turning to fundamentalist religion, while others look for scapegoats through racism. The tension is palpable due to the time in between killings. The events of the book take place over a year, so there is an axe hanging over the town permanently during a year of constant anxiety. The fears often lead to accusations and violence based on little evidence. Our heroes’ families are also in crisis. Jess’ family is dealing with his sister’s death, while Mark’s dad has an affair and causes the breakdown of his parent’s marriage. As the murders continue, the adults fall apart and the kids get smarter. This tension and pace creates a claustrophobic atmosphere and the small town crafted by the author is a great setting.

We find out that the ritual of the black monkey was started to put a stop to a murderer named Scarecrow around a hundred years ago. A hoodoo priestess taught the children of the time how to stop the killer, and stop him they did. Jess and Mark have to recreate a black monkey in order to defeat the Snowman.

It all builds to a rewarding and exciting conclusion. This was a really enjoyable book and is the first in a series of novels set in the town of Bakersfield. As I’ve mentioned, the town is a great setting and so I’m excited to see how the horror is expanded. This is going to wreak havoc with the property prices…