Tristan Risk gets Fired Up for Frankenstein Created Bikers 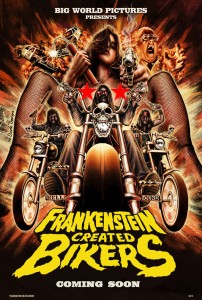 It’s been five years since Dear God No! splattered its way into our dark hearts, and it’s no wonder the new film has taken a while. Clocking in at a mammoth 2 ½ hours, Frankenstein Created Bikers is filmed in Cinemascope, on Super 35mm Kodak film. The shoot took place over a 30 day period and crossed 10 cities!

The batshit crazy official synopsis reads: A resurrected outlaw biker finds himself addicted to the substance that brought him back from the grave. In order to get his daily fix, his gang is forced to do the bidding of two sadistic scientists attempting to capture a biological mutation and perform a human head transplant on kidnapped teenagers. When his disgruntled ex-girlfriend is released from prison, she embarks on an explosive manhunt for her former lover and his strung-out pack of degenerates. With three dysfunctional bounty hunters, a rival motorcycle gang and an army of machine-gun toting strippers, it becomes a race against law-enforcement for bragging rights to the gang leader’s demise.

Let’s hope that when Frankenstein Created Bikers hits the UK, it doesn’t suffer cuts at the hands of the snip-happy BBFC, as happened with Dear God No! As we await a trailer, here’s one for Dear God No!