Texas has a history of lending its dusty, sun-scorched scenery to low-budget horror films, from the ‘70s Southern Gothic exploitation films of S.F. Brownrigg and a somewhat popular flick involving a power tool-based massacre, through to contemporary indies such as All The Boys Love Mandy Lane and Shawn Ewart’s under-the-radar Sacrament. 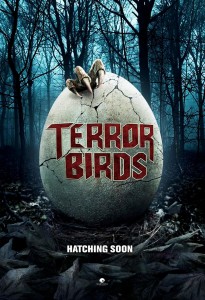 Well you can now add another to the list, in the form of feathered frightener Terror Birds. Directed by Sean Cain (Silent Night Zombie Night, Jurassic City), the creature feature was shot in Austin and Bastrop, a small city about 30 outside of the state capital. The cast is led by Jessica Lee Keller (The Adjustment Bureau) and Greg Evigan (Megaconda), and also stars Leslie Easterbrook, remembered for the Police Academy films but unforgettable as the unhinged Mother Firefly in The Devil’s Rejects.

Terror Birds has a Digital HD and VOD release set for March 8th in the US. A UK release is yet to emerge.

Synopsis:
College student Maddy Stern (Jessica Lee Keller) knows something is wrong when her father (Craig Nigh) goes missing during a weekend bird-watching trip in the woods of East Texas. As she enlists the help of her good-looking college pals to trek into the wilderness to find him, 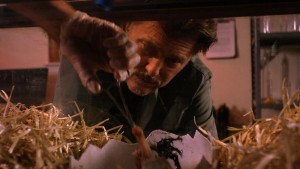 rampaging, six-foot-tall prehistoric “terror birds” with man-eating tendencies are the last thing anyone expects to find … much less a wealthy mad archaeologist (Greg Evigan) – but that’s exactly what they find, and they’ll need to run for their lives if they are to escape the wrath of the Terror Birds!

No trailer as yet, but more stills can be found on the Terror Birds Facebook page.