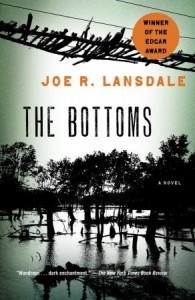 The Bottoms by Joe Lansdale is a rousing atmospheric murder mystery with an abundance and it has to said, more than its fair share of tension and thought provoking issue. The Bottoms won the Edgar award in 2000 and is definitely a book that will stay resolutely in your thoughts long after you’ve finished.

The story is an unforgiving coming of age tale for eleven year old Harry Crane set in the 1930’s who along with his younger sister discover the tortured body of a dead woman in the Bottoms of small East Texas town, Marvel Creek.

‘In that moment, something else changed for me. I realized that a person could truly die. Daddy and Mama could die. I could die. We would all someday die. Something went hollow inside me, shifted, found a place to lie down and be still, if not entirely in comfort.’

Harry’s father is the town constable and he begins an investigation that delves deeply into the racial divide prevalent in the era, nearly breaking him in the process. Caught smack bang in the middle are the two children who insert themselves into the forefront of proceedings as the murders increase and the town seek justice.

The characters virtually leap from the page and sit snugly on your shoulder whispering their intent, leaving an impression of the story permanently etched in your mind. Eliciting disbelief at attitudes, questioning morality and leaving you firmly rooting for a family that face exorbitant trials and tribulations.

There’s even some of the Lansdale humour littered sparingly within, some anxious store-bought teeth.

‘Once in a while be wore store-bought teeth, but they clicked and clacked and slid around when he talked, as if they might have some place to go and were anxious to get there.’

The Bottoms is a delightful story that brings back fond memories of classic stories such as To Kill a Mocking and McCammons Boy’s Life while still remaining unique and quite gripping in its own way. The characterization and the feelings inspired by this story are simply breathtaking at times, perfectly highlighting how times have changed. I did guess the killers identity from the various suspects tossed into the mix but it didn’t detract from a wonderful story that deserves to be appreciated by all.