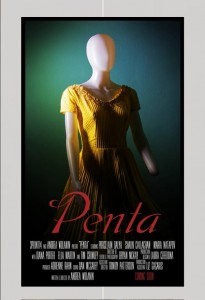 Synopsis:
“Penta is the bio-mechanical companion for the discerning connoisseur…. in just over twelve hours, the perfect girl will be standing in your home”. Based upon an Italian folk tale, Penta questions femininity, humanity and the system of abuse. Our titular heroine is a robot created to do nothing more than simply be the perfect woman –but what does that mean? As she acclimates to the world around her, her changes startle her owner and spur a chain of grim events.

Penta is an emotive 20-minute short that explores the cycle of abuse using a magical mix of sci-fi and horror. Starting to hit the film circuit, it has already made appearances at Ax Wound, Boston Underground, Rock and Shock and the Shawna Shea Film Festival. What I loved about Penta is that it first allowed me to question what is the perfect woman? If I could select and mould my perfect companion, what would that be? Is there such a thing as perfection and what happens if that perfection suddenly becomes flawed? Another factor of Penta is that it explores abuse, how it manifests and infiltrates into the world around us.

Adam (Shaun Callaghan) orders in his bio-mechanical companion. Arriving like a cut up mannequin, he carefully follows the instructions and begins to puts her together. When complete, he patiently sits back and waits. Soon the parts begin to fuse and the woman of his dreams materialise before his eyes. Penta (Porcelain Dayla) responds to his every command. She is there to please him in anyway he sees fit and to simply be no more than a vacuous shell of woman. One thing that science fiction has taught us over the years is that even ‘robots’ want to evolve. Penta is not wholly content in her new life and she starts to educate herself, take an interest in the world around her, which is much to the disapproval of her master. (I say master because there is no way she is seen as an equal). With every bit of betrayal he teaches her a lesson in a brutal and unforgiving manner. Penta is horrified but accepts her punishments, until it becomes ingrained that this is the cause and effect of not doing as you are told. Thus the ripples of control begin to spread when she embarks on a new family.

There are been a fair few films in the past that have used science fiction to examine mans desire to control his environment and everything contained with his bubble. Films that study the ideology of perfection and the longing for identity of the oppressed. All of which are fraught with danger for the maker and controller.

Writer and director Andrea Wolanin has broached this subject on a low budget and using a short amount of time. However, none of these elements have let her down as her film is very thought provoking, well written and a well-executed short. The sci-fi elements are interesting because it really questions our morality and our future. I would love to see this as a full feature. This would allow Wolanin to go into more depth and really delve into the psyche of the abuser and the abused.