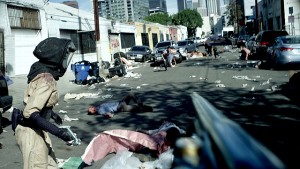 Hot off the Glasgow FrightFest press:
The news coming in today from Film4 FrightFest, after last week’s Glasgow line-up announcement, is a case of one step backwards but, thankfully, two steps forward.

Due to circumstances out of the programmers’ hands, director Tod Williams’ Cell has had to be pulled but has been swiftly substituted with another World Premiere, the viral chiller Pandemic, from director John Suits, whose previous film, The Scribbler screened as part of the Glasgow FrightFest strand two years ago.

The film will occupy the exact same slot as Cell with the rest of the programme remaining as is.

The second step forward I mentioned comes in the form of Tyler MacIntyre, director of the outrageous horror/comedy Patchwork, who will be joining an already impressive list of guests: Nathalie Dormer (star of The Forest), Joe Begos (The Mind’s Eye director), Can Evrenol (Baskin director), Johannes Roberts (The Other Side of the Door director) and Paul Hyett (Heretiks director).

Don’t forget, single tickets will be available as of 10am this coming Monday, 25 January. Grab them quick…