Kevin Smith Serves Up The Bratzis in Yoga Hosers 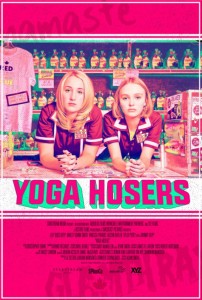 Kevin Smith’s new film Yoga Hosers will premiere at Sundance later this month. The second part in Smith’s ‘True North Trilogy’, it marks the follow-up to absurdist horror fantasy Tusk and continues his forward trajectory of doing whatever the hell he wants, naysayers be damned.

Smith was removed from many a Christmas card list after a bunch of insecure critics got all uppity over the indie director’s lashing out at the negative reaction to his admittedly somewhat ropey Cop Out in 2010. While some just can’t let it go, determinedly slating his work since, I for one am very much enjoying his foray into horror. While Red State split opinion (those critics’ wounds still sore), it is for me, one of Smith’s very best. Bold, daring and enraged, the film represented a new level of maturity for Smith and deserves a bigger following.

Smith’s answer to the shit being hurled his way seems to have been to go weird. Really weird. This new image from Yoga Hosers reveals the ‘Bratzis’ – foot-tall Canadian Nazis made of Bratwurst. Yup. And they’re all played by Smith himself. I don’t know about you but that’s all I need; count me in.

Synopsis:
Colleen Collette and Colleen McKenzie are teenage besties from Winnipeg who love yoga and live on their smartphones. But when these sophomores get invited to a senior party by the school hottie, the Colleens accidentally uncover an ancient evil buried beneath their Canadian convenience store. They join forces with legendary man-hunter Guy Lapointe to fight for their lives.