Welcome to Hell! It’s a New Poster for 31

To celebrate 31 finally getting its desired and much-needed ‘R’ rating from the MPAA, Rob Zombie shared a new poster for the Halloween-set horror on Facebook and it invites us to hell. Despite our excitement for 31, we don’t think we’d find a happy home in Zombie’s house of horrors, but we can’t wait to see what delightful frights the film has in store. 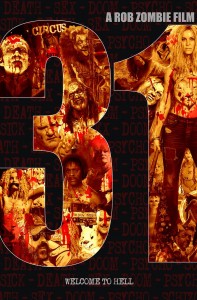 The poster brings together all the film’s manic characters that include Sheri Moon Zombie, Malcolm McDowell, Richard Brake, Lew Temple and more. It really does look like it’s going to be a blast of unforgettable gory joy.

31 will make its world premiere at the Sundance Film Festival which runs from 21st-31st January. Of course, it will be showing as part of the MIDNIGHT selection of films.