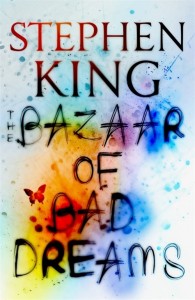 Synopsis:
A collection of unconnected short stories, novellas and poems, some old and some brand new, with introductory and biographical notes from King himself.

Having read and reread my way through a substantial chunk of Stephen King’s impressive output over the years, I thought I knew just about what to expect when I opened his latest, ‘The Bazaar of Bad Dreams’. It’s no secret that King has a fondness for revisiting certain themes and settings over and over, to the extent that I sometimes feel I’ve spent more time in the state of Maine than I have in my own home in Scotland. But it’s easy to forget that King also has a devilish flair for setting down something mundane and suspiciously harmless, before leaning back in his chair and smiling serenely at the reader over steepled fingers with a cunning glint in his eye. “Feel free to examine…” he writes in his introduction, “but please be careful. The best of them have teeth.”

He’s not wrong about that – the best of the bunch are the ones that catch you unawares and so shock all the more when they bite. And they are a surprise, because a few of the stories which precede them are a little, shall we say, toothless. Comprised of twenty pieces of unrelated short fiction, ‘The Bazaar of Bad Dreams’ is an apt title for a book which is a real mixed bag in terms of quality. This is always the way with anthologies of any variety, and there are undoubtedly some goods for sale in the Bazaar which will hold the eye and tempt a second look later, while others are quickly forgotten to gather dust.

The highlight is to be found right in the middle of the collection, a strange and unsettling tale called ‘Ur’ about (just trust me on this) an evil pink Amazon Kindle. The story behind the story is almost as bizarre as the thing itself – King recalls how Amazon wanted a bestselling author to write a piece featuring a Kindle as a plot element for promotional purposes, and the reader is left to fathom how the company could possibly not have seen the evil Kindle coming. Strange premise and backstory aside, ‘Ur’ is surprisingly disquieting, dabbling in the what-if-thing-were-different fantasy previously explored by King in the equally interesting but somewhat cumbersome read ‘11/22/63’. It works so well because it is King doing what he does best: stripping away the veneer of safety that covers the reader’s recognisable world to suggest something dark pulsing just out of sight beneath the surface. Perhaps a whole other world entirely. Or lots of them.

That being said, the majority of works in the collection do not rely on the sort of supernatural elements which are a staple of King’s previous catalogue. A notable exception is ‘Mile 81’, which opens the book and probably shouldn’t have – a repetitive story about a sentient killer car which only made me wish I was reading King’s ‘Christine’ instead. Luckily, the selection which closes the book (‘Summer Thunder’) is far superior and better placed; an affecting and melancholic story set at the end of the world, and the only one not to be followed by the next biographical note from King, it leaves the reader suddenly stranded and alone as they turn the final page

So are there bad dreams to be found at the bazaar? Perhaps one or two. Readers expecting something scary will likely be disappointed, because that’s not really the goal of any of the tales. Some are darkly comic, others touching and sweet; some, unfortunately, are a little dull (‘Blockade Billy’ in particular, a drawn-out story about baseball – about which I have absolutely no knowledge or interest – almost put me to sleep more than once). But a prominent theme which hangs over many of the stories is the simple drive to understand – to make sense of seemingly senseless acts, to know what comes after death, and what morality means – and it is these questions which are raised that will draw you in and stick with you after you close the book.

For Constant Reader and the casual one alike, there are at least a handful of stories in ‘Bazaar’ that will captivate and make up for the weaker ones, as well as plenty of interesting titbits to be found in King’s biographical notes. “Writing them makes me happy, because I was built to entertain” King says of his stories in his opening. He’s not wrong about that either.