Synopsis:
Over the course of one night, a junkie nurse, her scheming cousin, and a group of black market organ-trading criminals get caught up in a heist gone wrong. 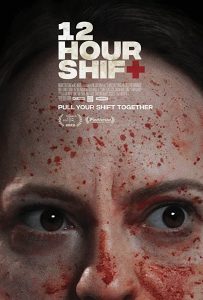 We’ve all had those shifts at work that just. Won’t. End. Writer and director Brea Grant’s 12 Hour Shift taps into that restless energy while raising the stakes, taking us on a blood-splattered ride through the work night from hell.

Set in the late 90s at an Arkansas hospital, the film follows Mandy (Angela Bettis), a cynical nurse with a drug addiction and a bad attitude. She hates most of her colleagues and doesn’t have a ton of empathy to go around when it comes to her patients, though the script wisely gives her enough of a moral compass to avoid making her completely unlikable. Which is important, because the organ harvesting scheme Mandy is running with her colleague Karen (Nikea Gamby-Turner) is pretty reprehensible, but 12 Hour Shift still manages to make us root for them when the shit hits the fan.

The same can’t be said for Regina (Chloe Farnworth), Mandy’s cousin, who Mandy has also brought into the scheme. While Farnsworth’s manic performance steals numerous scenes, her character’s stupidity—which kickstarts the plot—is often more frustrating than it is funny. It’s hard to believe the sharp-eyed Mandy would trust Regina with her dry cleaning, let alone human organs, and her deadpan assertion that she sometimes has “too much faith in humanity” doesn’t quite cut it.

That line in itself is funny, as is Karen’s wry response. But while 12 Hour Shift’s dark sense of humour frequently elicits a chuckle or at least a smile, many of the jokes feel half-baked. For example, the film makes a point of establishing early on that the town’s police force is currently understaffed due to a Y2K preparation course. It feels like the perfect set-up to an amusing situation or surprise twist—but there’s no payoff. It’s just something strange that happens, much like a random dance break; one more curiosity that goes unremarked in a film full of them.

Some of the characters, too, feel underused. This is particularly true of David Arquette’s Jefferson, a convicted murderer who is handcuffed to his hospital bed under constant guard. The script feels like it’s setting Jefferson up as a much bigger threat than he turns out to be, and even when he does inevitably get free, Arquette is given little more to do than stand around and look menacing. It’s wonderful to see such a strong focus on the interesting and gritty female characters, but it does leave a somewhat wistful aftertaste when you realise how much stronger it could have been if every plot thread and character had been fully developed.

Much like its characters, 12 Hour Shift has its ups and downs, but it lands enough of its jokes and serious beats to keep you invested in how it will end. Bettis gives an outstanding performance, fully committing to her worn-down character, and for all the farcical humour the script thrives on, her final scene will leave you melancholy. With its depressing hospital setting, the film might not be a particularly fun watch right now, but it’s still well worth checking out when it gets a wide release.