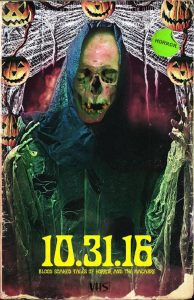 I love a good horror anthology; from VHS to ABCs of Death and from Holidays to The Theatre Bizarre, they are a wonderful way for short films from around the world to culminate together and present audiences with tricks or treats. There is not an anthology where every segment is perfect, but it’s almost certain that you’ll enjoy at least one, or maybe 15 if we’re talking about the ABCs of Death.

10/31/16 is another horror anthology that is on the way from the film-makers behind The Barn – which is, undoubtedly, one of the best horror films you probably won’t see this year. Prove me wrong and check it out! It’s an incredible ’80s throwback slasher and we loved it so much we gave it 5 stars. I didn’t write the review, but I agree with every single word.

The confirmed directors for this new anthology titled 10/31/16 will feature segments from Justin M. Seaman (The Barn), Zane Hershberger (Devilution), John William Holt (The Dooms Chapel Horror), Brett DeJager (Bonejangles) and Rocky Gray; the former drummer from Evanescence and composer of The Barn who is making his directorial debut.