Josh Campbell and Matt Stuecken, the writers of the excellent sequel 10 Cloverfield Lane are set to adapt the Young Adult novel Scythe for Universal. The novel has been written by Neal Shusterman and was released at the end of last year. There are currently 2 books in the series so far, so could this be the start of a new film franchise for Universal? 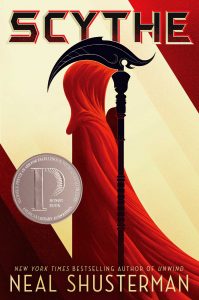 Scythe is a futuristic thriller set in a world where no disease, war or misery exists; even death has been defeated. The downside to this almost perfect world in the “Scythes”, the people tasked with keeping the population size under control by killing others. The story focuses on Citra and Rowan, who are two apprentice Scythes, but neither of them are happy about the “art” they are being trained in.

It definitely sounds like this could be the new Hunger Games, as we imagine the pair rebel against the order and fight to put an end to the heartless killings. But, that’s just me having a guess. I should probably read the book and stop predicting…