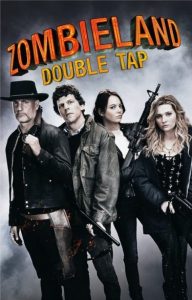 It’s been a decade since Columbus, Tallahassee, Wichita, and Little Rock drove off into the night leaving the zombie-infested Pacific Playland in the rearview mirror. They’re back, but not quite as soon as we expected. The sequel’s release date has been pushed back from October 11th to October 18th.

There’s still no trailer, but we know the sequel will see our heroes dealing with evolved zombies, other survivors, and conflicts within their dysfunctional little family.