After months of anticipation, the full official trailer for Rob Zombie’s 3 from Hell is finally here—and it delivers all the murder and mayhem we’ve been waiting for.

Clocking in at just under two minutes, the trailer is full of new footage, plot details, and glimpses of the Firefly family. We get to see the aftermath of the dramatic ending to The Devil’s Rejects, which saw the Otis, Baby, and Captain Spaulding going down in a hail of bullets, and the almost cult-like following the trio seem to have developed over the intervening years. 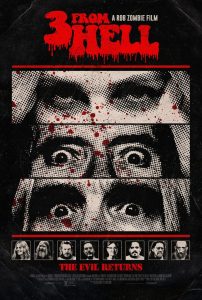 What have they been doing since coming back from the brink of death? Hard time and plenty of it—but by the look of things, that’s about to change.

Bill Moseley, Sheri Moon Zombie, and Sid Haig are reprising their roles in the film, which also stars Danny Trejo, Clint Howard, Dee Wallace, Wade Williams, Jeff Daniel Phillips, and a host of other recognisable faces. 3 from Hell will be released in nearly 900 select movie theatres across the U.S. on September 16th, 17th, and 18th. We’ll share wider release details when they’re available.

Did you miss the Firefly family? Check the trailer out below and let us know what you think!