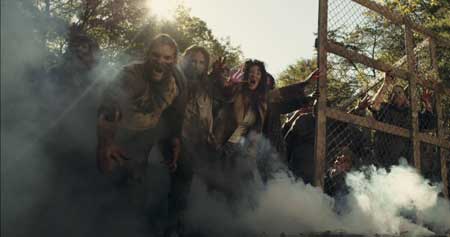 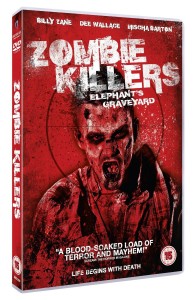 Synopsis:
When a zombie outbreak sweeps the world, a small community lead by a soldier (Billy Zane), battles on to survive. Zombie Killers protect its inhabitants and venture beyond the town’s walls to gather supplies and take down any walking dead who get in their way.

The zombie killers of this film are a group of misfits who train using paintball guns. We’ve never seen paintball incorporated in to a zombie film and it works well as a metaphor here. Sport is a way for the characters to mask the reality of the outside world and escape the horrors that lurk behind the safety of Elwood’s gates. It encourages them to work as a team and readies them for zombie combat. As the narration at the film’s beginning explains, the zombie killers are a “symbol of stability” and an ounce of proof that humans can survive, and be trained killers, on limited supplies. The setting of the film works well; giving people the bear minimum to survive on. There’s no Facebook, computers or mobile phones in this community; that is true horror. Zombie films have been used to comment on society, particularly in George A. Romero’s revolutionary low-budget Living Dead franchise and Zombie Killers is no different. There is plenty going on beneath the surface and despite what the characters argue, zombies are people. They are representations of humans at their worst and simplest; driven by a need to survive and reproduce, they bite the uninfected to ensure the continuation of their species.Despite its efforts to make the most of its low-budget, there are moments when the film feels little more than a 90s video game as its poor visual effects are exposed. It was a massive mistake for Zombie Killers to include CGI zombie deer and dogs into its narrative and it’s low-budget screamed through the seams. There aren’t many big budget blockbusters that could have pulled this off and it’s stupidity, rather than bravery, that lead Zombie Killers to attempt something so stupid. It was a nice idea to show that nature, too, is suffering, but it should have known its limits. Limiting the undead to humans would have worked just as well, because the make-up and design on the zombies was mostly very good and suitably gory. However, the final zombie tsunami was let down by cheap-looking repeated images. This is always a risk for low-budget films which wish to have a zombie hoard at its climax, and Zombie Killers does suffer in this way. There is an overall lack of zombie action, but the film’s concern is with its group dynamic, rather than the undead. In a similar fashion to TV hit The Walking Dead, Zombie Killers tries to tackle a lot of social commentary. Sadly for the film, however, is that it attempts to handle too much in its small runtime. There is a lot of narrative strands running through the film, but many are left hanging by the time the credits roll. This is a shame, because a lot of interest will be garnered by the religious cult, the crazed hero doctor and the touch of romance, but they are not fully developed. A feeling of un-satisfaction will be left at the film’s end, with lose ends hanging around all over the place.The cast do well with what they are given and there are a couple of witty, self-referential moments that add a layer of intelligence to the film. There is a scene where the characters discuss what they should – or should not – say if they become under attack, and “we’re gunna need a bigger boat” and “yippe-kay-yay mother-fracker” are big no-no’s. This level of humour worked well and it would have been nice to see a bit more comedy. Zombie Killers should have embraced its on-the-nose title and had a bit more fun with its story. It is far too sentimental for its own good and an almost non-stop strand of cheesy music runs through it, making it feel very melodramatic and unashamedly serious.There is a lot of potential within Zombie Killers and it is undoubtedly bold with a lot of good ideas bubbling on its surface, it’s a shame that the execution was second-rate. It is ultimately let down by trying to do too much and it would have benefited from a tighter storyline that focused on a little less. That being said, it’s a far from awful endeavour and zombie fans should see it as interesting addition to the genre.

Special Features:
Behind The Scenes

There is an engaging look behind the scenes as most of the main characters offer their views on the film and they quite clearly had a huge amount of fun on set. It’s not a very long segment and it would have been interesting to see what director Harrison Smith had to say, as he is sadly missing from this section. However, the next section discusses the look of the film and what went on behind the scenes – I know, very similar to the previous special feature. Here, we get a look at the creation of the zombies and what the director wanted to do to make this film stand out. Again, it’s not very long, but going behind the camera of a zombie film is always a bit of fun.