Synopsis:
A military plane carrying a dangerous chemical crashes in a forest, unleashing a zombie outbreak. Two doctors take it upon themselves to investigate, and put an end to the epidemic before it spreads. 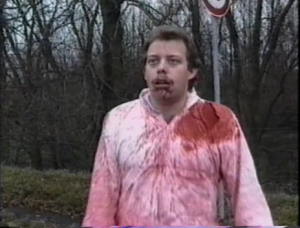 German director Andreas Schnaas is the undisputed king of low budget splatter. His filmography is full of entries that are full of excessive gore, exceedingly bloody, and even somewhat comical in their appearance. He’s best known for the infamous ‘Violent Shit’ movies, which follow the exploits of a butcher knife wielding serial killer, aptly named Karl the butcher-shitter. Sacrificing storytelling and suspense, Schnaas continues to opt for gross out imagery, and over the top sequences of extreme carnage.

His 1991 effort, Zombie 90:Extreme Pestilence, embodies just about everything you’d come to expect from him. It’s an enormous bucket of blood, one that’s overflowing with gore, dismemberment, and the funniest dialogue you’ll ever hear. This might have started out as a z-grade splatter fest, but ended up becoming a work of sidesplitting unintentional comedy. Simply put, this film can accurately be described as a fabulous disaster, and quite an entertaining one at that.

Zombie 90 is the story of two doctors who attempt to solve the mystery of a recent zombie epidemic. Of course, we detract from their story periodically to showcase some cheesy zombie-inflicted killing. For the most part, it follows the standard formula for a film of this nature. You have the outbreak, the undead that prowl the landscape, and the subsequent investigation and possible resolution of the conflict therein. What makes this film so memorable isn’t the formula, but rather the presentation. 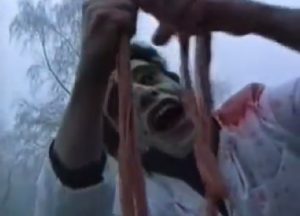 Shot entirely on VHS, and with a budget one can only assume wasn’t exactly generous; we’re left with something that resembles someone’s amateur movies rather than an actual horror film. It’s a combination of gore effects that aren’t entirely convincing, such as eviscerated organs that resemble chewed up bubble gum, and of course horrendous language dubbing. Not once do the spoken words from the actors match up to what the original story might have been, and have the appearance of being thought up on the spot. One of the more memorable lines include a description of a military commando unit as “nuclear special forces…of the military.” In the end, we’re left with something that makes us laugh, more than it makes us cringe or feel repulsed. 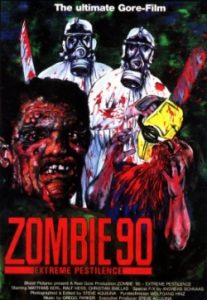 When it comes to the production design of the zombies, they’re just as low budget as everything else. You won’t find any extravagant prosthetics, just a great deal of face paint and fake blood. They match the overall feeling this film projects: amateur hour at its absolute finest.

At the end of the day, Zombie 90 is an absolute schlock-fest. It’s nothing more than a showcase of cheap splatter combined with dialogue that’s completely out of place. It’s in the same league with Zombie Lake as nothing to be taken seriously, and enjoyed for just how bad it is. This is something that’s worth a watch, at least once. If for no other reason, just to hear what the dub actors are saying.