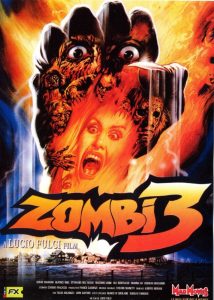 Synopsis:
A group of scientists have developed a serum called death one, which reanimates dead tissue. When terrorists attempt to steal it during a botched robbery, one of them becomes infected, and the surrounding area becomes contaminated. In an attempt to take control of the situation, the military decides to intervene. Soon, some vacationers and a group of soldiers find themselves caught between military death squads and the living dead.

Although it bears his name, Lucio Fulci had nothing but disdain regarding his association with Zombi 3. While being interviewed on the set of Demonia, the legendary director went into a tirade, proclaiming, “That is not my film, this is my film!” His anger was justifiable, as it pales in comparison to its predecessor, Zombie. (aka Zombie Flesh Eaters). Much like Sisyphus, the Greek myth who was forced to push a stone up a hill for eternity, Zombi 3 was a thorn in his side, one that he tried to remove for much of his career. Unfortunately, he was unsuccessful in getting his name removed from the credits, and it’s gone on to be permanently associated with him.

When Fulci had to stop filming due to illness, assistant director Bruno Mattei and screenwriter Claudio Fragasso took over production duties. What resulted was irreparable damage to Fulci’s career as a director, and a film that no one wanted to take credit for. Anyone familiar with Mattei’s filmography knows about his knack for lifting stock footage, musical scores, and other people’s ideas. As the undisputed king of the Italian B-movie, his works weren’t known for being the highest caliber, but still enjoyable to say the least. Mattei himself was quoted as saying, “Film is supposed to entertain, so there’s that.” Zombi 3 bears a striking resemblance to a Mattei film, only on a much larger scale. At the same time, it bears little resemblance to anything Fulci had released in his thirty-year career. Many of his motifs are conspicuous by their absence. (IE—slow paced death sequences, quick camera zooms, and close ups are nowhere to be found.)

Zombi 3 is the epitome of enjoyable low-budget schlock, marred with countless blunders and inconsistencies; it’s just as amusing as it is incoherent. Lacking a considerable amount of original content, it’s composed of many ideas from other notable releases. Borrowing heavily from The Crazies and Return Of The Living Dead, among others, and loosely sewing them together. Familiarity aside, an attempt is made to have some semblance of social commentary. Utilizing a zombie apocalypse to express concern about the environment, as well as the threat of a growing military complex, a la Umberto Lenzi’s Nightmare City. (IE—There’s a scene that takes place at a gas station that’s ripped straight from Lenzi’s film.) 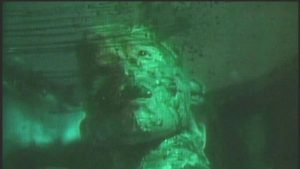 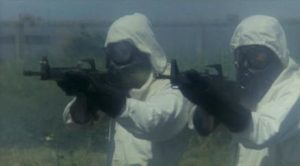 Like most B-movies from the time period, the plot takes a back seat. Zombi 3 is more or less a series of action sequences, with ordinary people struggling to survive the onslaught of the living dead. There’s not much thought in it, which is part of its charm and appeal. It deserves credit for being essential viewing for fans of bad cinema.