Zoe Saldana Joins the Adaptation of I Kill Giants

Zoe Saldana has joined the cast of the upcoming fantasy film I Kill Giants, which is based on the graphic novel of the same name written by Joe Kelly. Kelly’s other notable works include Deadpool and Uncanny X-Men. 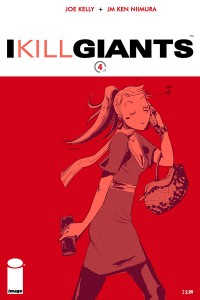 I Kill Giants follows a young girl called Barbara who has to battle both real and imaginary monsters and Zoe Saldana will be playing the role of her psychiatrist Mrs Molle. The two become close when Mrs Molle learns of Barbara’s real and imagined plight.

I Kill Giants will be directed by Anders Walter, whose short film Helium won the award for Best Live Action Short at the 2014 Oscars. The film is set to begin production this August and Madison Wolfe (Keanu, The Conjuring 2) will be playing the role of Barbara.