Z Nation is Renewed for a Season 5

Z Nation season 4 recently met a dramatic end in last Friday’s 2-hour finale, but it’s certainly not going to end there. Asylum CEO David Michael Latt has confirmed that Z Nation is going to return for a season 5. He took to Twitter to say:
“Thank you, Z Nation fans – We’ve been renewed for a 5th season. How could Syfy say no? #ITSAFANTHING.” 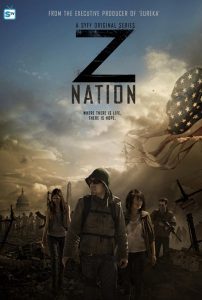 It’s great news for horror television and intense original content, but especially for those that love the zombie action from Z Nation. Beginning back in 2014, Z Nation sees a group of people fighting to make it to California to a lab that awaits the blood of the last known survivor of the zombie apocalypse.

Z Nation was created by Craig Engler and Karl Schaefer and stars Russell Hodgkinson, Nat Zang and Keith Allan. It’s cheesy comedy fun, but Z Nation has a welcome home in a space that is dominated by the serious undead action from The Walking Dead and its spin-off series Fear the Walking Dead.