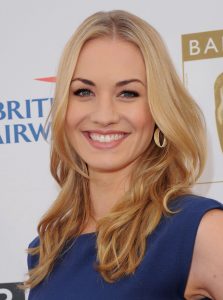 Dexter and I, Frankenstein’s Yvonne Strahovski has joined the cast of Shane Black’s The Predator, making her the second woman to do so. Hooray! She is set to play the mother of Jacob Tremblay’s character, who is accidentally drawn in to the Predator conflict by her ex-husband, played by Boyd Holbrook (Gone Girl, Narcos, Logan).

You may also recognise Strahovski from the TV series 24: Live Another Day or The Astronaut Wives Club, but she is additionally set to star in the upcoming sci-drama series The Handmaid’s Tale and Dennis Iliadis’ horror He’s out There.

The Hollywood Reporter reports – as its name would suggest – that “fierce alien creatures” feature in The Predator, so take note of the plural – more than one Predator, yes please! No confirmation as to whether the film will take place in suburbia just yet, but here’s to hoping because that would be awesome.

The cast further includes Olivia Munn, Trevante Rhodes, Keegan-Michael Key, Sterling K. Brown, Thomas Jane, and Alfie Allen. Get ready to head to the chopper when The Predator is unleashed on 9th February 2018.