You’ll Forever Fear Your Bedroom After Watching The Nightmare Trailer 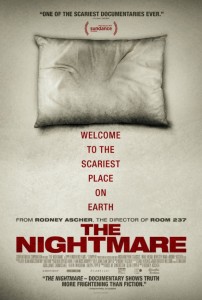 Succumb to the powerless and terrifying feeling you get when you experience sleep paralysis as you watch the new trailer for Rodney Ascher’s documentary The Nightmare.

The film explores the horrific phenomena of sleep paralysis, which Ascher has suffered himself, making him the perfect candidate to bring the fear-inducing experience to life. The Nightmare follows eight people as they divulge their own personal experiences and looks at how odd occurrences between them suggests something more sinister might be happening.

Director Ascher is known for his documentary Room 237 about Stanley Kubrick’s film adaptation of Stephen King’s novel, The Shining and it’s hidden meanings. The trailer gives us a peak from under the bed at the possible monsters lurking within our bedrooms when we fall into a sleep state.

The Nightmare will be released on VOD this June 5th 2015.

Synopsis:
Eight people from very different backgrounds explain what they’ve experienced when their sleep paralysis takes hold. All of them recall what they believe are hallucinations of “shadow people” that loom over them and grow increasingly aggressive the longer the paralysis lasts. A rational explanation becomes harder to find as the similarities become alarmingly real.