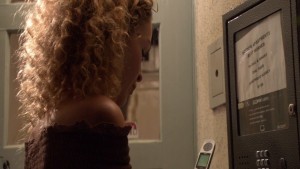 There is something ever so appealing about an anthology horror, because you know (or at least hope) that one segment, at least, will offer something enjoyable. As was the case with All Hallow’s Eve which was a surprisingly strong addition to the anthology style horror film.

The new trailer for All Hallow’s Eve 2 shows much as the same as eerie goings-on start happening when a video tape arrives at a woman’s house. Comparisons to Michael Doherty’s terrific Trick ‘r Treat will be unavoidable, especially with those creepy costumed kids wandering around. Nonetheless, there are some effective scares going on; especially towards the end when an Evil Dead-esque woman makes an appearance.

Instead of just the one director – as was with All Hallow’s Eve – this time, we have a handful of directors that include Jesse Baget, Elias Benavidez, Andres Borghi, Jay Holben, Mike Kochansky, James Kondelik, Jon Kondelik, Bryan Norton, Antonio Padovan, Ryan Patch and Marc Roussel.

Synopsis:
Alone on Halloween, a young woman finds a mysterious VHS tape on her doorstep—a tape that shows a series of gruesome and ghastly tales that appear to be all too real. But these terrifying glimpses of damned souls are not the only horrors that stalk her. A sinister, pumpkin-faced killer is using the videotape as a portal into our reality; and if he makes it through, this twisted trickster seeks only one “treat”: Blood.