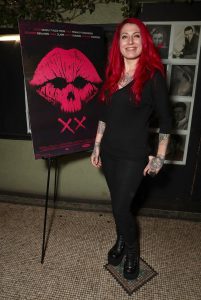 Jovanka Vuckovic is a jack of all trades and anything but a master of none when it comes to genre cinema. First cutting her teeth as a visual effects artist, her next career move found her as serving Editor for Rue Morgue Magazine. Her seven year stint at the helm of said publication opened many a door for more female involvement in the horror genre and it wasn’t long before she caught the writing/directing bug herself, releasing a string of shorts which too helped in championing women and raising their profile in film.

The first of the aforementioned shorts came in the form of the Guillermo del Toro-Exec. Produced “The Captured Bird,” which earned her the Best Short award at the 2012 Fantasia Film Festival. A couple of shorts later and a timely call from XYZ films’ Todd Brown found her producing and also directing a segment for the first ever all-female horror anthology XX.

With XX all set to release through XYZ Films/Magnet Releasing this Friday, SCREAM’s Howard Gorman caught up with Vuckovic to open up the box on this brand new anthology and discover the impetus behind choosing an adaptation of one of Jack Ketchum’s original premises as the perfect fit for this project.

SCREAM: As this is the first ever all-female anthology, was there anything you were specifically adamant that you felt needed to be portrayed and did you never feel the need to discuss your approach with the other filmmakers before shooting so as to really be on the same page?

Jovanka Vuckovic: The mandate was always that the segments had to be written by a woman and directed by a woman and star a woman in the lead role. Other than that, Magnolia basically gave us all creative control and we were just curious what would happen if all of us went away and wrote something, made our segments and then put them all together. There was then this fascinating surprise that happened at the end because we didn’t talk to each other about each other’s segments and they all sort of ended up being family-oriented. Make of that what you will, but it was a complete accident.

Personally, I didn’t choose to adapt “The Box” because it was about family. I just chose it because I remember reading it years ago when “Peaceable Kingdom” first came out and Jack Ketchum was well-known for splatter fiction and tucked inside amongst all these really violent stories was this little existential horror story that has a MacGuffin and is very Twilight Zone so I thought it was my opportunity to do my episode of “The Twilight Zone.” We just thought it would be a neat of experiment and it turned out really interesting and the family theme was a complete coincidence.

SCREAM: Talking of coincidences, you had actually been considering making a horror anthology and getting it off the ground through Crowdfunding when you got a timely call from Todd Brown who had a similar idea that he wanted to put to you?

JV: I had, yes. Basically, I had noticed all these women being passed over for jobs on all the anthologies that were coming out. Women were virtually absent from these contemporary anthologies so I was thinking about Crowdfunding one but it was going to be a totally different kind of format than XX. Out of the blue, Todd Brown calls me up and says, “What do you think about doing an all-woman horror anthology?” And I was like, “Well! As a matter of fact … I was thinking about doing one!” He told me he could bring financing and then his title was better than mine so I quickly just abandoned my concept and jumped on board his and asked him what he needed me to do. Then we started compiling a master list and reaching out to directors.

SCREAM: And how did you pick and choose the directors you went with? The lineup has changed a fair bit over the course of the film’s production.

JV: Initially it was going to be “name” directors together with one or two up-and-comers with me being in that scenario with the up-and-comer. We hoped that – if this were successful – we would be able to use the same format again with more well-known names and then use the fourth director segment to serve as a job opportunity for someone who is trying to break in. So the initial lineup was completely different, and for good reasons and bad we lost directors. In some cases it was because they were getting too much work. Jenn Lynch is basically booked up for like the next million years directing every television show imaginable. Mary Harron also got a TV show green lit. And then in other cases, for very sad reasons, we lost directors like Antonia Bird, who I’m sure you knew had done Ravenous. We were in talks with her and she had fallen ill and went to convalesce in the country and we were just lost for words when we heard she had lost her battle with cancer. 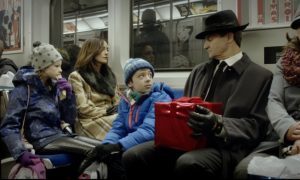 Ultimately, there were so many challenges involved: Shooting it across three different countries, multiple Unions, multiple Union changes, director lineup changes, and we could have given up part way through and said, “You know what? Let’s just hire a guy to do the last segment and get it over with and release it as a horror anthology.” But Todd never gave up on the project and Magnolia never gave up on the project and we remained committed to making it for women, by women.

SCREAM: Something you have said on various occasions is that you feel that women have been misrepresented in horror. Did you feel the need to underline anything specific in your segment with regards to how women are misrepresented?

JV: Well, we’ve got a history of being pin cushions and knife fodder in the horror genre. We have also been portrayed as final girls but the problem with the final girl is that, as resourceful as she is, she’s not a real person; she’s a trope. Now that we’re seeing more women writing and directing, we’re seeing a different perspective. With my segment “The Box,” I actually had to change the gender of the protagonist. Originally it is the father who is incapable of connecting with his children and I had to change the gender just to fit the mandate of the anthology. But the most amazing thing happened: It suddenly changed points of view and it became about ambivalent motherhood and about how not all women are meant to be mothers. Because 90% of all movies in the last hundred years have been made by men, it’s not surprising that they have been told from the male perspective. So it was important to me to remain true to the spirit of Ketchum’s original story but switching the gender of the protagonist shouldn’t be a big deal. If doing so makes the story fall apart then it probably isn’t a very good story anyway. One of the reasons why Ellen Ripley is the greatest example of the strongest final girl is because she was originally written as a man. And then, when Ridley Scott made her a woman, he didn’t change anything else about the character and that’s what distinguishes her from all the other final girls.

SCREAM: Aside from XX, you have a couple more projects in the works, both of which sound like they will raise the profile of women in film just as much as your previous projects.

Next up I have a film called Riot Girls which is a sci-fi action movie. It’s not a horror film but it’s definitely horrific because it portrays kids being extremely violently to one another. It’s set in a world where all of the adults have died and the kids are left to fend for themselves. It also stars two young women as the female leads, one of whom is gender queer, so I’m trying to get more representation diversity on the screen. These are the things that matter to me and that I’m committed to. But above all else, it’s basically a hyper-violent, apocalyptic, coming-of-rage love story.

And then I have my own script called All my Heroes are Dead. That’s basically a supernatural thriller that I’ve been writing about a woman with terminal brain cancer who has to kill five people to save her own skin. As you can see, neither of these projects are straight horror or straight sci-fi but those kinds of movies that bend genres and defy expectations have always been my favourite kinds of movies.

We’d like to thank Jovanka for taking time to speak with SCREAM and we strongly suggest you seek out XX when it hits select theatres and VOD this Friday, 17 February.

In the meanwhile, we’ll leave you with the film’s trailer, and keep watching this space as we have an interview with another XX director, Roxanne Benjamin, coming your way later this week…