In Issue #4 of Dynamite’s latest run of Xena: Warrior Princess, Xena and Gabrielle launch a full-scale rescue mission to save the Harpies, a group of women taken hostage by Roman soldiers. Joined by Ares, the now mortal God of War, they race to the port of Ephesus in order to save their kidnapped friends, but even though their plan proves successful, Gabrielle seems to have a plan of her own – one that doesn’t include Xena. 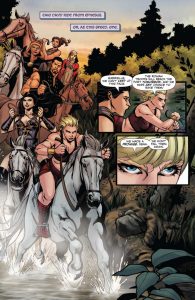 Valentine’s Xena has improved enormously since the release of the first issue, but this chapter doesn’t stand up as well as the ones preceding it. Being so full of action from start to finish, the characters don’t get much of an opportunity to expand or develop, particularly Xena, who remains relatively one-note throughout the issue. Gabrielle is afforded a little more attention in Issue #4, giving voice to the complex moral problems that the characters face. Her interactions with Ares are the best thing about the issue, and as the pair set off alone at the end of the book, it should be interesting to see where the story is going next; or, perhaps more importantly, how Xena will react when she finds them missing.

It’s also important to note that Valentine’s Xena is the first official story to make the central characters out-and-proud lesbians, giving them a full-on make out session in the closing pages of the book. It’s an understated moment, and one that offers no apologies or explanations. With a franchise known for its somewhat lacklustre tie-ins, it’s refreshing to see the comic doing something that the original TV series never could.

Ariel Medel’s art is a little patchier than the last two issues, with faces often becoming blank and inscrutable. But even though Medel’s illustrations seem rushed, they only feature in the first half of the issue. Julius Gopez, inexplicably, provides artwork for the second, creating something far darker and moodier than we’ve previously seen before. This might have made sense if the story called for a flashback or dream sequence, but having such a dramatic shift in styles is jarring, particularly as it seems to serve no purpose. 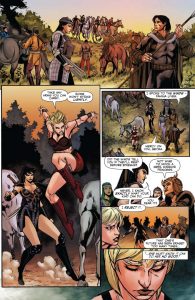 In the past, I’ve criticised the editing team for an apparent lack of attention to detail, yet the same thing happens in Issue #4, with costumes and weapons changing from panel to panel. Both Ares’ outfit and Xena’s chakram change in the middle of scenes, and judging by the colours, Xena appears to apply red lipstick in the middle of a fight. Obviously, things like this will go largely unnoticed by casual readers, but Valentine’s Xena is clearly aimed at established fans of the franchise, and it’s things like this that make the series seem disposable, as if not given the appropriate level of love or attention.

But none of this has anything to do with Valentine’s writing, which is consistently strong throughout. Equally comfortable when throwing out pithy jokes as she is making references to the Peloponnesian War, Valentine has a love for the source material that shines through in each issue. If only the same thing could be said for the editorial team.