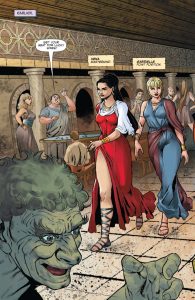 Issue #3 of Dynamite’s new tie in of Xena: Warrior Princess takes place immediately after the previous issue, with Xena and Gabrielle going undercover to face the Romans in Croesus’ Palace. This is where the series really hits its stride, with the entire issue reading like a classic Xena episode, striking the perfect balance between action and subversive, tongue-in-cheek humour. Though the first two issues of Valentine’s Xena were preoccupied with establishing the story, Issue #3 is like a call-to-arms, with Xena and Gabrielle driving the narrative forward at a dizzying pace. If you weren’t onboard, now’s the time to get involved.

Most of the issue takes place in the palace, the finest gaming hall in Rome. Disguised as Roman noblewomen, Xena and Gabrielle’s plan is to kidnap General Gaius Valerius in order to save the Harpies, a band of warrior women from Xena’s evil past. This set up enables Valentine to write some of the best dialogue of the series so far, referencing all of the classic gambling/heist movies, from James Bond to Ocean’s Eleven. The moment in which the characters stumble across a woman selling Xena merchandise is delightfully self-referential, utilising the same style of humour that made the original show so iconic. It is also worth mentioning that the protagonists here are fairly obviously gay. Of course, this will come as no surprise to 90% of the people who watched the show, but for those who never wanted to see a lesbian subtext, the undertones here are fairly explicit. 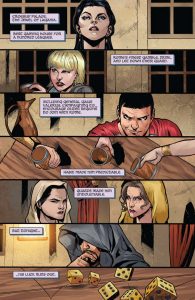 In my review of Issue #1, I criticised Ariel Medel’s illustrations, all of which seemed vague and inexpressive. But Medel’s art has improved dramatically over the course of the last two issues. Here, Xena and Gabrielle actually resemble the actresses who played them, and facial expressions are always clear and easy to read. Similarly, Medel’s costume designs are fantastic, particularly in the scenes where Xena and Gabrielle are undercover. Sticking to colours and textures that we’ve seen the characters in before, Medel creates outfits that seem equally familiar and new. Frison’s cover art is, as always, incredibly beautiful. 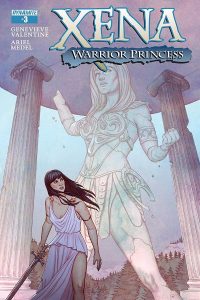 Valentine’s run of Xena has improved in leaps and bounds since it began two months ago. TV tie-ins have never been known to be particularly innovative or artful, but this is a comic that is perfectly in keeping with the tone and style of the original show. Making Xena and Gabrielle’s relationship explicit is a choice that feels both fresh and exciting. In an industry still suffering from a lack of diversity, it’s so refreshing to see LGBT characters who are strong, empowered, and completely unaffected by the ways they are perceived. It might have been true in the early 90s, but it seems like Xena is still the hero we all need.