Synopsis:
After being inadvertently frozen for 25 years by the Greek gods, Xena and Gabrielle wake up to find themselves in the middle of a war between the new emperor of Rome and the Harpies, a tribe of all-female warriors from Xena’s evil past. 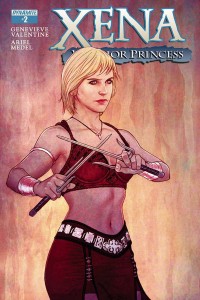 Issue #2 follows on immediately from issue #1, with Xena and Gabrielle doing battle with the Harpies. It’s a vast improvement over the somewhat patchy first issue, with Gabrielle’s murderous visions lying at the heart of the series. Though less violent and disturbing, issue #2 proves there’s still life in the franchise yet, with Valentine’s Xena becoming one of the best tie-ins to date.

The most impressive thing about Xena #2 is the vast amount of awareness that Valentine has for the franchise. Xena comics in the past have often felt completely incongruous to the tone of the original series, but Valentine skilfully weaves in characters and storylines from the show, playing on themes and ideas in a way that never feels laboured or expositional. When the Harpies are unmasked, we find that each member is from a different place that Xena and Gabrielle have travelled, including China, Rome, Mongolia, and Anatolia. The reveal that Meryem is actually the daughter of Borias is an interesting one, and one that I hope is explored further in subsequent issues. Additionally, the introduction of Chilapa – a minor character from the fourth season of Xena – is also appreciated, as her story was left unfinished in the original run of the show.

But the most interesting thing about Valentine’s Xena is Gabrielle, who is distracted by visions of her friend’s impending death. Seyma, the shamaness, provides the horror aspects of the issue, performing ritual magic and wearing a headdress made of bones. Her motives are never fully explained in issue #2, but judging from her possible ties to the evil Alti, one can only assume that there’s far more to her than meets the eye. We already see Gabrielle’s vision of beheading Xena in issue #1, but here we get hints that Xena will fight to the death in the Coliseum, presumably at the hands of Gabrielle herself. But the message of the original series was undeniably secular, about putting more faith in yourself than in the gods, or in the dreams and visions of others. We know that Xena will survive, but how she will evade a chakram to the neck is, at this point, anybody’s guess.

Ariel Medel’s artwork is also an improvement over issue #1. The characters here are much more artfully rendered, and facial expressions are, for the most part, much easier to decipher. Medel’s strength is clearly in drawing action scenes. Movements and poses are both dynamic and expressive, even if the faces occasionally feel like an afterthought. Nanjan Jamberi also deserves a special mention for his colours. The issue, which takes place exclusively at night, has an eerily cold colour palette, giving the comic a strange, dream-like quality. Though I can’t quite tell where the series is heading, there’s enough energy and atmosphere in issue #2 to make me want to pick up the next few issues.

If you’re looking for something groundbreaking, admittedly you won’t find it here. But Dynamite’s new run of Xena is a gleefully enjoyable series, and one that seems to be improving from issue to issue. Though the artwork isn’t always consistent, Valentine’s love for the original series more than makes up for it, and I’m excited to see where she plans to take it over the course of the next few months.