Xena: Warrior Princess has many connections to the horror genre, even if not immediately apparent. Currently airing on the Horror Channel in the UK, Xena was created by Sam Raimi and Rob Tapert, creators of the Evil Dead franchise (with Bruce Campbell himself going onto become a recurring character in the first four seasons of the show). With Lucy Lawless playing the central villain on the fantastic Ash vs. Evil Dead, Xena is enjoying something of a renaissance, especially with the rumours of a Xena reboot being confirmed earlier this year. Xena #1 from Dynamite Comics is a fun, campy addition to the show’s legacy, highlighting the best and worst things about the original run of the series. 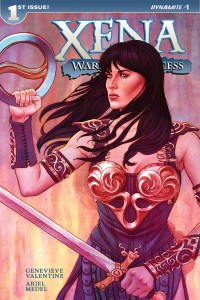 The story takes place between season 5 and 6, after Xena and sidekick Gabrielle have brought about the twilight of the gods. After meeting two runaway children, Xena gets caught up in a war between the Romans and the Harpies, a band of nomadic women that Xena has encountered in the past. With both sides assuming Xena is a sympathiser of the other, the comic ends with Xena and Gabrielle preparing to battle it out with the Harpies.

Genevieve Valentine, probably best known for her work on Catwoman a few years ago, is a strong writer, mixing moments of characterisation with a relatively fast-paced narrative. It’s also clear that she’s a fan of the original series even if certain moments seem slightly out of character (Gabrielle’s “Oh goodness!” is a particularly jarring example). Valentine also includes some satisfyingly nasty elements, such as a vision of the future in which Gabrielle appears to decapitate Xena with her own chakram. But like the series itself, Valentine’s Xena veers wildly in tone, from dark and gory to saccharine and twee, especially in the two children that Xena and Gabrielle meet on the road. Obviously they’ll be important to the story in future issues, but in issue #1, they undermine the darker, more interesting elements – particularly compared to Xena’s poignant flashbacks with Borias. 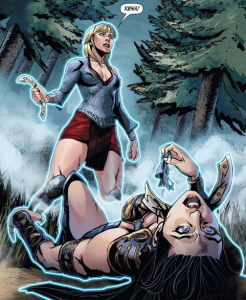 Like much of Dynamite’s output, the artwork is what really lets the comic down, and Medel’s illustrations often seem rushed and expressionless. Costumes and weapons change design from panel to panel, and character’s feelings are often impossible to guess from their faces. Jenny Frison’s cover artwork, however, is absolutely gorgeous.

All in all, Xena #1 is a fun, forgettable romp with some much-loved characters. Although Valentine’s run is off to a somewhat mediocre start, there are more than enough reasons to pick up issue #2, even if it’s just to learn more about Gabrielle’s murderous vision.