We don’t tend to cover a lot of superhero news over at Scream, because it’s not exactly horror is it? That’s not to say that we aren’t fans of Marvel, DC and everything in between, we just don’t get the chance to report on them so much. However, we have learned courtesy of ComingSoon that Twentieth Century Fox’s upcoming New Mutants flick is to feature some of those horrifying tropes we all love. It has been described as a “Stephen King meets John Hughes-style horror movie”, so that’s mighty interesting. 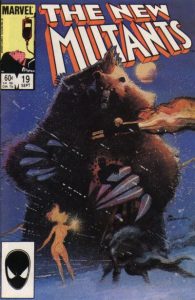 After the disappointment that was the last X-Men film Apocalypse, Twentieth Century Fox must be keen to restore its audience’s faith in X-Men and hopefully this spin-off will do the trick. ComingSoon has also confirmed that the villain of the film will be Demon Bear, a giant bear – duh! – with strength drawn from negative human emotions. He also has the power of teleportation and the ability to corrupt souls, so he’s quite the dark fellow.

New Mutants is gearing up for a spring 2018 release and will be directed by Josh Boone (Stuck in Love, The Fault in our Stars). The film stars Maisie Williams as Wolfsbane, Anya Taylor-Joy as Magik and Nat Wolff as Cannonball.