WTF! Gets a VOD Release from Midnight Releasing 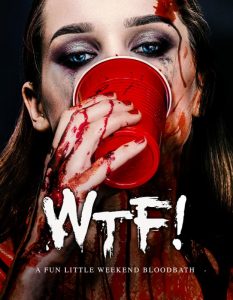 Peter Herro’s directorial debut WTF! is to get a VOD and Digital HD release courtesy of Midnight Releasing on 1st August 2017.

Synopsis:
Three years ago, twenty-two year old girl-next-door Rachel () barely survived a brutal massacre that left her friends in pieces. Time has passed, Rachel has moved on, but unfortunately history has a way of repeating itself.  Her close friends are spending spring break in a secluded house in the woods, and they have cordially invited her to join. Little does she realise that another bloodbath will be showing up as plus one. Once Rachel and her friends arrive at the cabin, the partying, sex, and terror begins.

You can check out the trailer for the film below; it shows a party going wrong when people start showing up dead. It’s not the most of original concepts or executions, but we’re hoping the film can, at least, offer some creative kills to please the gore hounds.