Shooting has wrapped on the next Wrong Turn film, and we finally have a name, along with a teaser poster. The seventh instalment in the long-running horror franchise is officially called Wrong Turn: The Foundation. 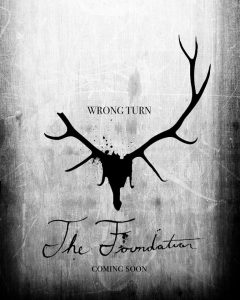 This instalment will see an unlucky band of friends visiting Harpers Ferry, West Virginia, as they look forward to a few days of hiking the scenic Appalachian Trail. Unfortunately, they run foul of “The Foundation,” a community that’s lived in the mountains since before the Civil War—and which isn’t especially fond of strangers.

The film was directed by Mike P. Nelson (The Domestics) and written by Alan B. McElroy, who also wrote the original Wrong Turn. The cast includes Matthew Modine (Stranger Things), Damian Maffei (The Strangers: Prey at Night), Emma Dumont (The Gifted), and Chaney Morrow (Haunt).