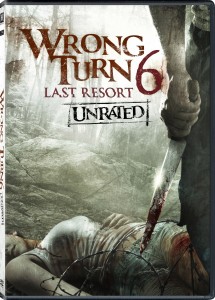 Synopsis:
Danny (Anthony Ilott) arrives deep in the bowels of the West Virginia hills in a forgotten resort by the name of Hobb Springs. Lured here after being informed of a mysterious inheritance, he’s introduced to the resorts managers Sally (Sadie Katz) and Jackson (Chris Jarvis) who inform Danny of a long lost family he’s never known; a family which is about to make him decide between his friends or his bloodline.

2003 wasn’t noted as being a vintage year for the horror genre; a dreary sequel in JEEPERS CREEPERS, a failed fusion in FREDDY Vs. JASON and a Dark Castle misstep in GOTHIKA all populated the box office. If you scratched the surface though, the lurid originality of HOUSE OF 1000 CORPSES or the witty morbidity of DEAD END were begging for your attention – as was the gripping backwoods nastiness of WRONG TURN. Shot in Canada for a little over $12 million and using a script by Alan B. McElroy, the writer of the worthy HALLOWEEN IV and the vastly underrated RAPID FIRE; this Dushku starring orgy of cannibalistic mayhem was a mega hit in the home entertainment market.

This success naturally led to a succession of sequels; the first in 2007 benefitted from the guidance of Joe Lynch, but with Declan O’Brien taking the helm for WRONG TURN 3 and two subsequent movies, the franchise began a seemingly freefall descent into mediocrity. All of which pre-amble brings us to number six and a new director in Valeri Milev, a Bulgarian, whose first feature was the gore-laden and heartily recommendable CODE RED. Shooting WRONG TURN 6 in his homeland for a meagre million dollars he brings a fresh story to the series which in turn gives it some impetus. Admittedly the clunky predictability and tiresome characterisation are still evident – but it’s only a fraction of what hindered the other recent sequels.

Danny, played by Anthony Ilott is a well-written, well-acted character with an interesting backstory, while Aqueela Zoll – fresh out of KILLJOY 4 – is solid casting as his girlfriend Toni. Chris Jarvis in his role as Jackson, desperately attempting to forge a familial bond with Danny is another highlight, but sadly Sadie Katz as Sally is wincingly plastic while a couple of the supporting cast – notably Roxanne Pallett sporting a woeful New York accent – are unexceptional at best.

Irrespective of its shortcomings, this IS a mini-revival. Its alluring hotel location offers a pleasing backdrop, while a sharp narrative zips along with heavy doses of nudity and sex. Gore-wise it’s an inconsistent blend of practical and digital, but in its prime it manages to repulse to the level you hope, while added to the mix are some nicely crafted death sequences. WRONG TURN 6 isn’t likely to lure those back who dismissed these continuations as a never ending decline, but for those who steadfastly stuck with these movies, this sequel offers a glimmer of hope that there’s life in the old inbred yet.