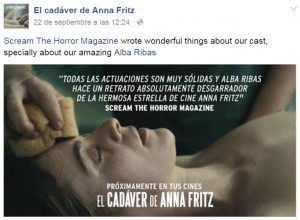 First time feature writer/director Hèctor Hernández Vicens left a life of writing for a Muppets style TV show in Spain to relate the sinister tale of a group of youths who let their hormones get the better of them as they perform necrophilia on the corpse of the recently deceased superstar Anna Fritz.

Obviously any film that dares to delve into the depths of this kind of subject matter is going to secure its fair share of haters and critics, but writing The Corpse of Anna Fritz off so quickly would be a grave mistake. Whilst necrophilia is one of the world’s eternal anathemas, there have been some impressive transgressive movies which deal with the subject in a respectful manner and Hernández Vicens handles the topic astutely.

SCREAM: Congratulations on the film which is getting great reviews, with the exception of a few feminist critics.

Hèctor Hernández Vicens: Ha, yeah. With films like this you are always going to get those who love it and those who hate it regardless of the actual cinematographic qualities of the film. A lot of people will see it deals with necrophilia and straight away say, “Disgusting! Hate it!” But then there have been a lot of people who have said, “Hell. This is a horror that, whilst not splurting blood everywhere, is a really great effort and I love it.” But yeah, the subject matter itself was always bound to put certain people off and that’s totally normal. I actually expected much worse reactions and I was nicely surprised that many people who didn’t want to see it at first watched it and really enjoyed it in the end. 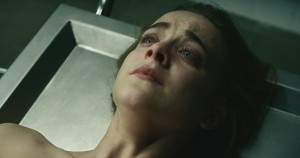 You mention that there’s not much blood in the film. Was that always your intention or did you decide to cut back on the blood and effects due to budgetary constraints?

This was my intention right from the beginning. Blood really isn’t that expensive [laughs]. You can buy it in bulk and mix it up and get your blood at bargain basement prices. I didn’t want the audience to just see actors on the screen all tense and scared out of their minds. I wanted the audience to experience those very same emotions. So the hardest part was creating an environment, creating the pacing, making sure the camera followed the pyschological aspect of the characters and drawing the audience into the morgue they see on the screen. The story really didn’t require blood to make it work.

Something that suprised me is that your previous work includes writing for a programme called Los Lunnis which is the Spanish equivalent of programmes like The Muppets or Sesame Street. Moving from that to a film that deals with necrophilia is a pretty big shift in direction.

Well actually, if you think about it, my first horror stories were the ones I wrote for Los Lunnis. All the puppets are monsters so it’s not as big a step as it might seem. Aside from that though, I had great fun working on that show. It allowed me to create short 20 minute stories and had my imagination working on overtime. I’d even go as far as saying it probably had me thinking harder than if I were writing for a series for adults. Obviously I couldn’t have pitched an idea for one puppet raping another dead one in a morgue so I had to keep that idea for a different kind of audience and now people are getting to see that (minus the puppets) in The Corpse of Anna Fritz.

My hat goes off to the whole cast as they all had such tough roles to pull off. I think you cast Bernat Saumell and Cristian Valencia pretty much right off the bat but the others were a bit more complicated to sort out. 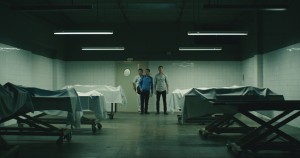 Bernat became involved at first as a producer and I told him that I’d really liked a role he’d done in another film. When I told him that he was like, “Shit, do you reckon you could give me a role in this one then?” I told him we could see how things panned out with the casting and what not and he also brought a load of friends along to the casting process. With Cristian, rather than coming in for the casting process as a possible candidate he came to help me with some other guys who were trying out for roles but it became clear really quickly that he was who we needed. What was a tough role to cast was Albert Carbo’s character. The role required so many subtleties because he goes on such a long journey in the film but as soon as Albert came along we knew he was the one.

When it came to Alba Ribas, who plays Anna, at first her agent was somewhat concerned because we’re talking about a role where Alba was going to be playing a corpse with people raping her. But I spoke with her and she came for a try out and she felt comfortable and eager to get involved. Once her agent realised that the film was a serious film and dealt with the subject in a serious manner everything ran a lot smoother. And Alba is amazing and I always wanted her. It’s so difficult to find an actress to play someone who has so little to say in the film but who can portray the whole physchological journey she goes on with her eyes and facial expressions.

Did you do much research such as speaking with medical experts or rape victims whilst preparing the script and the characters?

I did send Alba and our drama coach to speak to a doctor so that Alba could learn what it is like to wake up from a coma. Coincidentally, our coach had actually woken up from a coma when he was younger. We did all kinds of exercises like getting thrown into the swimming pool to feel the sensation of drowning and things like that that helped Alba to experience the kinds of emotions involved. We also had a doctor on hand who explained to us how these things do happen and people can actually accidentally be certified as dead. It’s not a common occurrence but things like drugs and alcohol can leave people in a narcoleptic state with all vital signs slowing right down to the point that a doctor can think that someone is actually dead.

To wrap up, can you tell us what else you have planned for the near future?

I’m actually working on another film right now. It’s another psychological thriller that explores evil and our basic instincts like The Corpse of Anna Fritz but it’s still in the early stages so I can’t reveal much more than that just now.

Thanks so much for speaking with SCREAM, Hector.

We’d like to thank Hèctor for chatting with us and urge you to catch the film if you are in Sitges on the 11th, 12th or 13th of October. Full details of all screenings can be found here

In the meantime we’ll leave you with the trailer for The Copse of Anna Fritz: